PHILADELPHIA - There’s a sign slapped on the front door at Fink’s Hoagies in Northeast Philadephia saying the city had shut them down but right next to that sign there's a handwritten note defying the order.

Fink, a Vietnam vet, former city employee, and Northeast Philly born and raised, has been making hoagies here for 14 years.  Last month, he admits he made a mistake, he didn’t have a mask on when a city inspector walked in.

"I believe in safety for everybody. We had just opened for five minutes, she walks in and she said you don’t have a mask on I’m closing ya," Fink said. 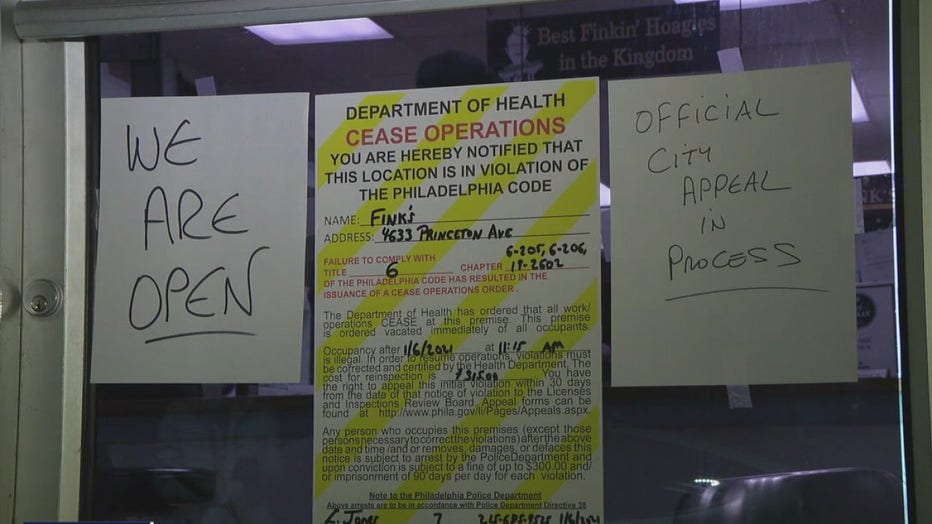 Fink said he shut down for two days, paid a $315 fine, and reopened. Fast forward to this week, he says the same inspector came back.

"Next thing I know she comes back on January 6 and says what are you doing open you’re not allowed to reopen until I reinspect you," he explained.

Fink argued, the inspector left and came back with another citation and police. Big picture, he’s upset. He adds he received a lot of support on social media and also from city council members who’ve received other complaints about enforcement of pandemic rules.

"You know I’m working 60 hours a week for free or so I can pay the bills," Fink said.

"2021 should be the year when we’re making sure people are in compliance and being safe without drastic consequences," Councilman Robert Heron said.