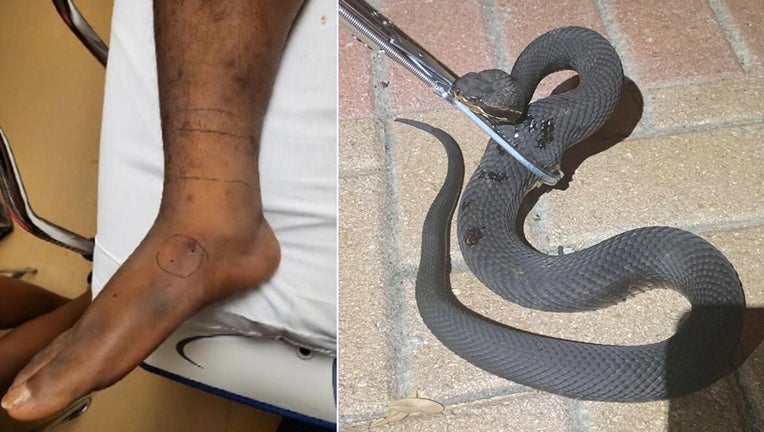 EMBROKE PINES, FLA. (WSVN'FOX 13) - A Florida man had to quickly find medical treatment after he was bit by a snake that was hidden under a garden hose at his home.

Pembroke Pines police were called in to wrangle a venomous snake from a Pembroke Pines home after the bite. Home surveillance video captured the moment when the man stepped outside and was bitten by a venomous cottonmouth snake. The incident occurred on July 4 near Pines Boulevard and Interstate 75.

Miami-Dade Fire Rescue’s “Venom One” unit was also called to administer anti-venom. Now, officials are warning people about what to do when they come across a snake that decides to bite.

“If you are bitten you want to get away from the animal as soon as possible,” explained Lt. Chris Pecori with the Venom One unit. “Don’t try and capture it. It’s already bitten someone. If you are able to safely get a picture of it, please do and that will assist the providers in selecting the correct anti-venom.”

He said you should also try to sit or lie down with your injured part level with your heart. Also, Pecori said, do not use a tourniquet, any tight bandages or ice, and don’t attempt to suck the venom out.

“The definitive treatment is going to be anti-venom,” he said.

As for the cottonmouth, officers managed to capture the snake and release it safely into wetlands, and away from populated areas. The man who was bitten is recovering.

“Just realize when you’re out hiking or walking at night, just be cautious in high grass or in areas where it’s not very well lit,” said Pecori. “The other thing is to try and wear a closed-toe shoe also to protect yourself.”

According to Pembroke Pines police, it is "snake bite season," which occurs from April to October.

Cottonmouths are found through wet areas of Florida, according to Florida Fish and Wildlife Conservation Commission. They can be confused with nonvenomous water snakes but they can be distinguished from their eyes. Cottonmouths' eyes are not visible due to an overhanging brow ridge, whereas water snakes have round pupils and are visible when viewed above.