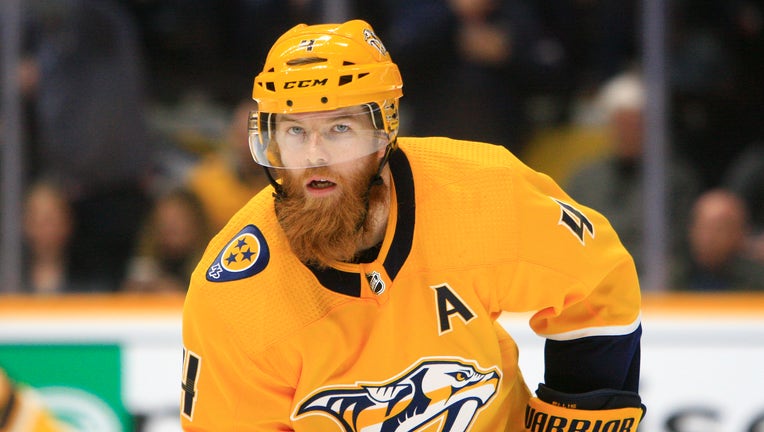 The 30-year-old Ellis is coming back from shoulder surgery, but the Flyers think he can regain the form that made him one of the NHL's best defenseman — a position of need for the team for a while.

Ellis is the second member of the Predators' 2017 Stanley Cup Final roster traded away this month. Forward Viktor Arvidsson was shipped off to the Los Angeles Kings on July 1.

"We felt it was time for a change to our core this offseason, and we are really excited to add an influx of youth, size and skill into the lineup with these additions," Nashville general manager David Poile said in a statement.

Poile noted Glass is a former sixth-overall pick that the Predators believe has a high ceiling as a center prospect, while the 6-foot-5 Myers gives Nashville much needed size on defense. But Poile said they will miss Ellis' leadership and work ethic.

"Over the last decade-plus, he helped lead our franchise through its most competitive era, spending the last four seasons as associate captain," Poile said. "We wish Ryan and his family all the best in Philadelphia and thank him for all he did during his time with the Predators."

Ellis, listed at 5-10 and 180 pounds, missed 20 games after shoulder surgery this season. He had 18 points in 35 regular-season games, but was second on the team in average ice time at 23 minutes, 46 seconds.

Flyers general manager Chuck Fletcher called Ellis an excellent all-around defenseman and one of the best passers in the game.

"We believe he has good hockey ahead of him," Fletcher said. "There’s no reason to think that he can’t. We like him a lot as a player. We like the cap hit. We think it’s a fair number. We like the fact he’s already signed. He brings some cost certainty. we can plug that number in over the next few years."

Ellis had one goal and four assists in six playoff games in Nashville's first-round loss to Carolina.

During Nashville's run to the 2017 Stanley Cup Final, Ellis was third with 13 points in 22 games. He led the Predators with 51 blocked shots that postseason.

"We weren’t good enough last year," Fletcher said. "Adding Ryan is an upgrade and a step in the right direction. We’re not going to get complacent and we’ll do what we can to upgrade where we can."

The trade left Ellis "pretty shocked" when he heard the news. He had spent his entire career with Nashville in the Western Conference, leaving him unfamiliar with the Eastern Conference and the Flyers.

Myers, 24, has 29 points in 115 regular-season games over parts of three seasons with Philadelphia. Patrick, the second-overall pick in 2017, played in 197 games over three seasons for the Flyers. He missed the 2019-20 season with a migraine disorder, but played in 52 of 56 games this season.

The 22-year-old Glass had four goals and six assists in 27 games with Vegas this season. The 6-2 center has nine goals and 13 assists in 66 career regular-season games.