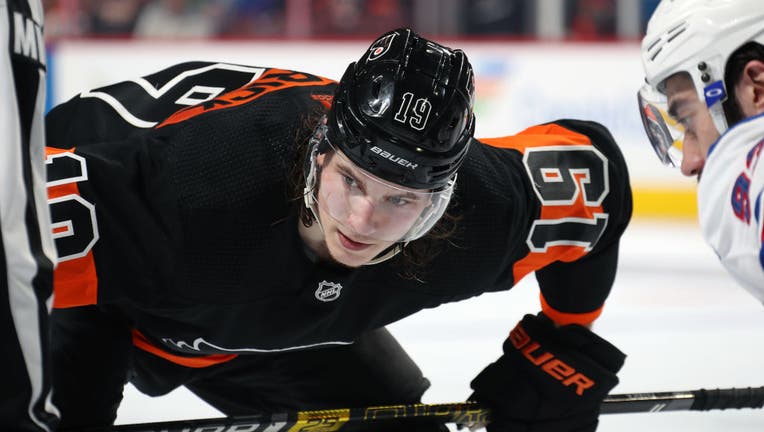 Nolan Patrick #19 of the Philadelphia Flyers looks on prior to a face-off against the New York Rangers on March 31, 2019 at the Wells Fargo Center in Philadelphia, Pennsylvania. (Photo by Len Redkoles/NHLI via Getty Images)

VOORHEES, N.J. - Nolan Patrick skated toward Oskar Lindblom during a routine drill. Hunched over, Patrick had a brief conversation with his Philadelphia Flyers teammate who knows a little something about comebacks.

Lindblom made an improbable return last season when he played for the Flyers during the NHL start following a December diagnosis with a rare bone cancer.

Patrick never made it to the ice.

The 22-year-old center, the No. 2 overall pick in the 2017 draft, was stricken with debilitating migraines. He hasn’t played since April 2, 2019, and long-term concerns over his health lingered all season.

Patrick skated Monday at the first day of Flyers’ training camp. He hopes can make the lineup for the Jan. 13 opener against Pittsburgh.

"I’m not going to get into too much detail on how my head feels," Patrick said. "I’m going to see how camp goes and go from there."

Patrick was cleared for contact and showed no hesitation chasing the puck during some light action that included shootout drills. Coach Alain Vigneault, starting his second season, said it was too early to decide if Patrick would be ready for opening night.

"I see the excitement in him both being back with his teammates, working and having fun, and I see the excitement in his teammates with him being back," Vigneault said. "In this situation, probably very nervous today, anxious to get going, hasn’t played in a while. But I think for him and for our team, this was a very positive day, a step forward."

The Flyers never expected Patrick, who has 26 goals and 61 points in two seasons, to miss so much time. General manager Chuck Fletcher said last January that Patrick was progressing and he hoped the forward to return for a playoff push. If healthy, Patrick would provide valuable depth as a third-line center behind Sean Couturier and Kevin Hayes.

The Flyers said in September 2019 that Patrick had been diagnosed with a migraine disorder. Fletcher said at the time that the condition was not believed to be related to hockey, and Patrick has a family history of migraines.

Patrick declined to open up much on his health or if he was ever close to playing last season.

"It’s obviously mentally tough whenever you’re injured, watching," he said. "You want to be out there. It’s obviously a tough injury that affects you mentally more than other ones would. But hopefully I get back here soon."