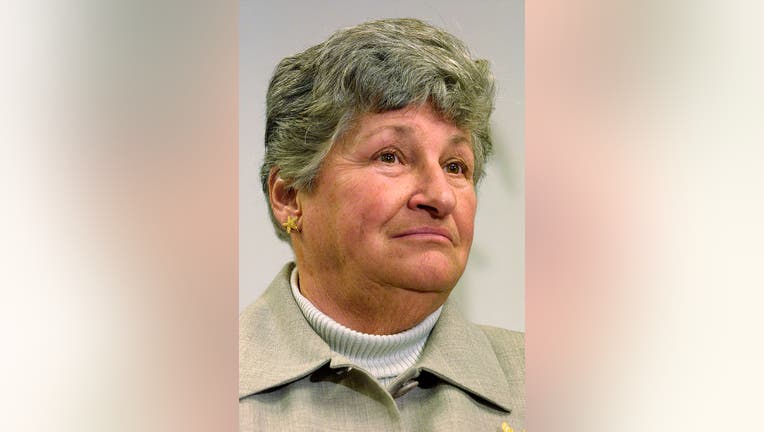 DOVER, Del. - Ruth Ann Minner, a sharecropper’s daughter who became the only woman to serve as Delaware’s governor, has died. She was 86.

Minner, who served as governor from 2001 to 2009, passed away Thursday morning, according to Agriculture Secretary Michael Scuse, a friend who once served as her chief of staff.

"She was a true leader, a great role model for women and those that have had it not so easy in life, to show that if you work hard, are honest, you can make it to the top," Scuse said.

A high school dropout who was twice widowed, Minner got her first taste of politics as a legislative bill clerk and rose through the Democratic Party ranks to become the state’s most powerful politician.

As governor-elect in 2000, Minner didn’t dwell on breaking the gender barrier, but instead noted that she was the first governor in almost 50 years to be elected from downstate Delaware.

"You know, I don’t think it really matters to me that I’m a woman," she told The Associated Press at the time. "I’ve found out since the election, though, that it does matter to a lot of women. It matters to a lot of young girls."

Her humble beginnings and matronly appearance led one political columnist to dub Minner the "Aunt Bea" of state government, a reference to the family matriarch in television’s "Andy Griffith" show.

"She was a leader who had a real common touch," said Gov. John Carney, who served as Minner’s lieutenant governor.

But Minner’s appearance belied her reputation as a hard-nosed politician who didn’t shy from battles with Republican lawmakers or other opponents.

"After my first husband died, I became a very independent woman," she explained after the 2000 election. That was decades after she ran for a state House seat in the 1970s intent on changing a banking law that required her husband to co-sign any loan application.

Amid cries of "Ban Ruth Ann!" from outraged business owners and libertarians, Minner in 2002 signed one of the nation’s toughest prohibitions on smoking in public places.

Other landmark legislation included a 2007 measure prompted by the child sex abuse scandal in the Catholic Church. The bill abolished Delaware’s two-year time limit for filing personal injury lawsuits and established a two-year period during which lawsuits previously barred by the passage of time could be brought anew. The bill resulted in more than 100 lawsuits, prompting the Catholic Diocese of Wilmington to seek bankruptcy protection and to settle with victims of priest sex abuse for $77 million.

Minner also was instrumental in the establishment of a state scholarship program that has provided free college tuition to more than 13,000 Delawareans.

A fiscal conservative who espoused liberal social views, Minner spent much of her time steering Delaware through tough budget cycles. Within days of becoming governor, she ordered state agencies to cut spending proposals. She subsequently ordered hiring freezes and more than $350 million in budget cuts, and later persuaded lawmakers to approve a $300 million in spending cuts and tax and fee increases.

Minner’s much-touted anti-sprawl program, dubbed "Livable Delaware," achieved only limited results, and her administration was plagued by scandals and lawsuits involving the state police, prison system and state-run psychiatric hospital. She barely won re-election in 2004 after a female prison counselor was taken hostage and sexually assaulted by a convicted serial rapist before he was shot to death by a guard. Talking to a reporter shortly after the incident, Minner suggested that such things are almost expected in prisons.

In 2012, businessman Christopher Tigani, a Minner friend and supporter, was sentenced to prison after pleading guilty to federal charges of making illegal campaign contributions to statewide and federal candidates. As governor, Minner helped Tigani obtain a cheap, long-term lease of state-owned land in Milford for his family’s liquor distributorship.

Minner was born Ruth Ann Coverdale in Milford in 1935. She left school at 16 to work on the family farm and married Frank Ingram a year later. Ingram died of a heart attack at age 34 in 1967, leaving his 32-year-old widow to raise three boys while managing the family’s asphalt paving business.

Faced with being the sole breadwinner for her sons, Minner earned a general equivalency diploma and briefly studied elementary education at a community college.

In 1974, Minner successfully ran for a state House seat, having first tasted politics as a bill clerk in the General Assembly, then as a receptionist for Gov. Sherman Tribbitt. She served in the House until 1982, when she was elected to the state Senate, where she served for 10 years. Minner’s signature achievement as a lawmaker was the Delaware Land and Water Conservation Act, which led to the preservation of more than 30,000 acres of open space.