The first public glimpse of a confession Brian Laundrie left in a notebook in the Florida swamp where he killed himself last year reveals his final words.

TAMPA, Fla. - The mother of slain travel blogger Gabby Petito shared that she is "fed up" Monday afternoon, just days after the release of a "narcissistic" confession from her daughter’s suspected killer and boyfriend, Brian Laundrie, who penned the confession, which included a suicide note, found near his body in October.

"Narcissists rewrite history to escape accountability," read text on an image she included with the tweet. "You are not crazy."

She also indicated that the "truth will be revealed" and that the family would not stop in its pursuit of justice for Petito.

Laundrie claimed that he and Petito were "trying to cross" a stream when he heard "a splash and a scream." He framed Petito's murder as "merciful."

BRIAN LAUNDRIE'S GABBY PETITO CONFESSION: EXPERTS WEIGH IN ON ADMITTED KILLER'S CLAIMS, ‘THIS IS ALL LIES’

"I couldn’t find her for a moment, shouted her name," Laundrie wrote. "I found her breathing heavily gasping my name, she was freezing cold. When I pulled Gabby out of the water she couldn’t tell me what hurt. She had a small bump on her forehead that eventually got larger. Her feet hurt, her wrist hurt but she was freezing, shaking violently, while carrying her she continually made sounds of pain, laying next to her she said little lapsing between violent shakes, gasping in pain, begging for an end to her pain."

IMAGES OF THE NOTE LEFT BEHIND:

Laundrie added: "I don’t know the extent of Gabby’s injurys (sic). Only that she was in extreme pain."

Dr. Brent Blue, Wyoming’s Teton County Coroner, ruled Petito’s death a homicide as a result of manual strangulation and blunt-force trauma to the head and neck.

John Kelly, a criminal profiler and psychotherapist who has interviewed a number of murderers, said the note "galls" him and that he believes it shows Laundrie had exhibited signs of extremely narcissistic personality disorder and sociopathic disorder.

"He found her breathing heavily and gasping for breath, so he decided to choke her out?" he said.

Laundrie could have gone for help or called 911. Petito's phone was not destroyed by water damage – the FBI said in January that Laundrie allegedly used it to send fake texts in an attempt to cover up the killing.

Jason Jensen, a Utah-based private investigator who has been following the case closely, called the note a blatant "attempt to rewrite history."

"He writes this farcical tale about her falling down and getting injured while crossing Spread Creek, and describes how he couldn't leave her behind," Jensen said. "He stated he ‘ended her life.’ He cannot admit, ‘I killed her.’"

Search crews found Petito's remains on Sept. 19 at a campsite north of Jackson, Wyoming, where the couple had stayed in August. By then, Laundrie had already driven back to Florida in her van, using her debit card. He went on vacation with his parents, sister and nephews around Labor Day Weekend. When Schmidt reported her daughter missing on Sept. 11, the family declined to comment.

Laundrie snuck away on Sept. 13, despite being surveilled by the North Port Police Department, and killed himself at an environmental park down the road, at one of his favorite local hiking spots. On Oct. 20, police recovered his remains and other belongings, including a drybag and the notebook, after being led to a clearing by his parents. 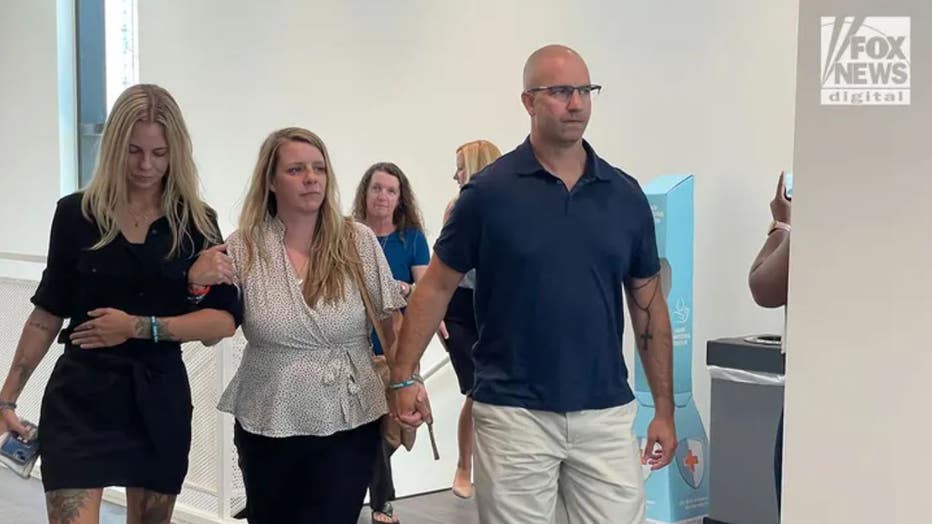 Nichole Schmidt, center, seen walking into a Florida courtroom ahead of a hearing on June 22, 2022. (Fox News Digital/Michael Ruiz)

Law enforcement had searched the area for five weeks, but floodwaters hindered their efforts.

Both of Petito's parents have sued Laundrie's parents, alleging that they withheld information about the 22-year-old's death and attempted to help their son flee justice.