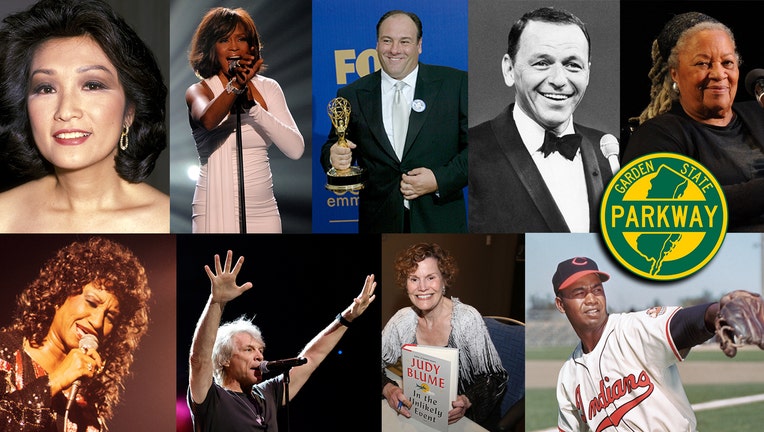 Some of New Jersey's most iconic figures are getting their names on something other than awards or gold records: Garden State Parkway rest stops. (Getty Images/NJTA/FOX 5 NY)

The next time you take a break on your drive to the Jersey Shore, you might find yourself grabbing a coffee and filling up at the Jon Bon Jovi Service Area. Some of New Jersey's most iconic figures are getting their names on something other than awards or gold records: Garden State Parkway rest stops.

"This is about putting New Jersey greatness on full display. This is the first part of an extended statewide exhibition of New Jersey heroes throughout our state," Gov. Phil Murphy said in a statement. "From military heroes on the Battleship New Jersey to historical figures on the New Jersey Turnpike to science and technology trailblazers at Newark Penn Station, New Jerseyans will find pride in our contributions to society and the world."

The service areas will contain Hard Rock Cafe-style exhibits and artifacts, and an interactive Wall of Fame featuring a life-sized video monitor showcasing Hall of Fame inductees and their acceptance speeches, according to the governor's office.

"Service area patrons will be invited to pose with various Jersey legends and share the photos on their social media platforms," according to a news release from the Hall of Fame and the governor.

Since 2008, the New Jersey Hall of Fame has inducted more than 180 people in science, sports, performing arts, arts and letters, public service, enterprise, and also a category known as "unsung heroes" who have "made invaluable contributions to society, the State of New Jersey and the world beyond," according to its website.

"We encourage patrons in each service area to identify with one of our inductees and take to heart the advice our inductees provide on how to reach the pinnacle of their respective professions," Hall of Fame President Steve Edwards said. "The rest is up to you!"