WASHINGTON - The family of George Floyd met Tuesday with President Joe Biden and several lawmakers in Washington, D.C. on the one-year anniversary of his death amid the push to pass a policing bill in his name.

The killing of Floyd, a 46-year-old Black man who died at the hands of a White Minneapolis police officer, sparked a global reckoning over systemic racism and a call for police reform. The meetings occurred as Congress mulls a bill called the George Floyd Justice in Policing Act, which would ban chokeholds by federal officers and end qualified immunity for law enforcement against civil lawsuits. It would also create national standards for policing in a bid to bolster accountability.

The bill passed the House in March, but faces a tougher road in the evenly-divided Senate.

The Floyd family met privately with Biden at the White House. They also sat down with Democratic House Speaker Nancy Pelosi and California Rep. Karen Bass, the lead House Democratic negotiator on the policing bill, and had other meetings planned with Sens. Cory Booker, D-N.J., and Tim Scott, R-S.C.

"Today is the day that he set the world in a rage," Philonese Floyd, Floyd’s brother, said, while addressing reporters at the Capitol alongside family members, Pelosi and other lawmakers. "And people realized what's going on in America, and we all said, ‘Enough is enough.’"

"We need to be working together to make sure that people do not live in fear in America anymore," he added. 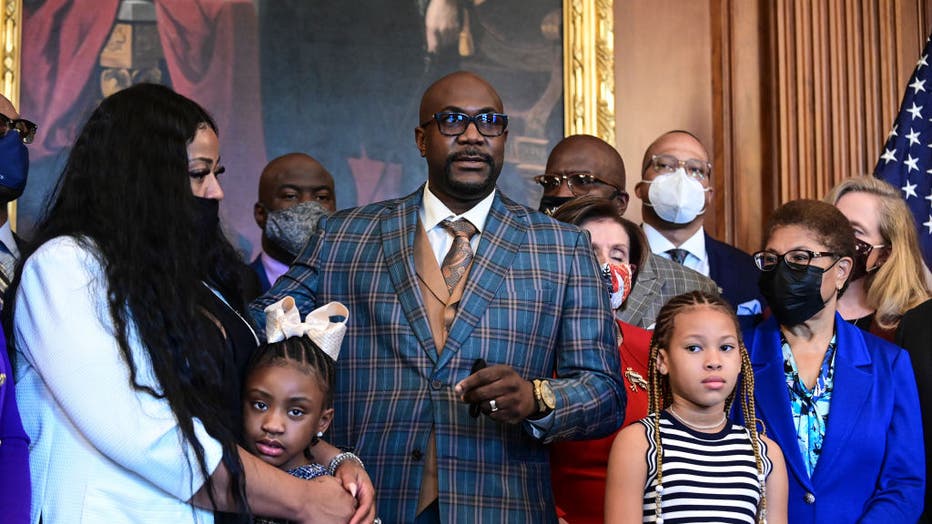 Philonise Floyd, George Floyd's brother, speaks to reporters while standing with members of the Floyd family prior to a meeting to mark the one anniversary of his death on May 25, 2021 at the U.S. Capitol in Washington, D.C. (Photo by Erin Scott-Pool

Biden previously set the anniversary of Floyd’s death as the initial deadline for the bill to reach his desk, but the issue of police reform has been a politically thorny one. Capitol Hill negotiators have struggled to hammer out a compromise that would make it through the Senate, though they have made some progress and expressed optimism this week about its progress, officials said.

"We hope to bring comfort to your family by passing the final bill very soon," Pelosi said.

White House press secretary Jen Psaki has said the White House sees the George Floyd Act as the appropriate vessel for police reform, despite Biden having notably taken a back seat in discussions, in contrast to his push for the infrastructure bill and the COVID-19 relief package.

"We have been respecting the space needed for negotiators to have these discussions," Psaki said.

She and congressional negotiators declined to offer a new deadline for reaching an agreement. Bass said talks would continue "until we get the job done" while Scott, the top House Republican bargainer, said separately that negotiations "have a long way to go still but it’s starting to take form."

That bill has gone nowhere in the Senate, where the 50 Democrats will need support from at least 10 Republicans to overcome a bill-killing filibuster. GOP lawmakers have preferred more modest changes.

Floyd died on May 25, 2020 after former Minneapolis police officer Derek Chauvin kneeled on his neck for more than nine minutes, while Floyd repeatedly said he couldn’t breathe. His death, captured in widely-shared bystander video, prompted months of nationwide protests focused on systemic racism in the U.S., as well as the renewed debate over police reform.

In Minneapolis and across the country, several events were held Tuesday to mark the one-year anniversary. Minnesota Gov. Tim Walz called for a moment of silence lasting for 9 minutes and 29 seconds, the length of time Chauvin kept his knee on Floyd’s neck and back.

On Sunday, hundreds of people gathered for a rally in front of the courthouse in downtown Minneapolis, including members of Floyd’s family and others who lost loved ones to police encounters. Many held signs with pictures of Floyd, Philando Castile and other Black men killed by police.

"It has been a long year. It has been a painful year," Floyd's sister Bridgett told the crowd on Sunday. "It has been very frustrating for me and my family for our lives to change in the blink of an eye — I still don't know why."