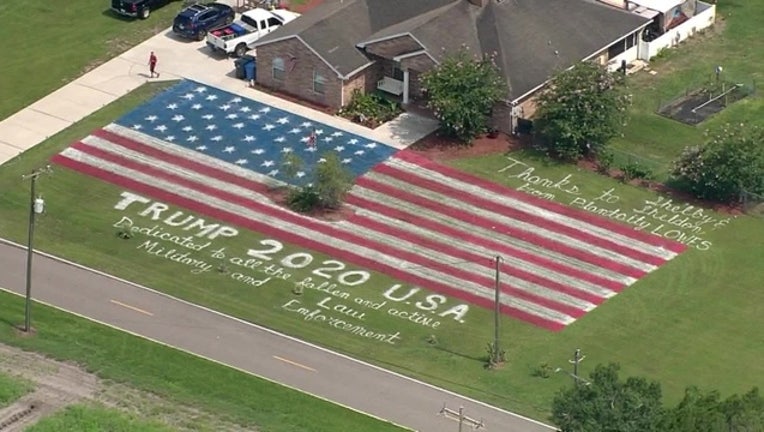 PLANT CITY, Fla. - A resident painted a massive flag on his front lawn on the eve of the Fourth of July in Plant City, Flordia.

Jason Stanley said he initially put up a few flags in celebration of Independence Day outside of his home on Joe McIntosh Road, but decided he wanted to make a grander display in support of the military, law enforcement and President Trump.

"I'm a true believer that if it wasn't for soldiers and law enforcement being there for us and giving their lives on duty, that I wouldn't be able to do this," Stanley told FOX 13.

Stanley said he and his daughter used 15 gallons of marking paint, which is used on football fields, to create the patriotic lawn display.

In all, he said it took about six hours to complete. He said it was because of the sacrifices of our troops and law enforcement that he could dedicate that time to creating the display.

"Without those people, we couldn't take the time out of our lives" to create the massive flag, he added.

Stanley said he hopes those who see it take the time to appreciate the freedom they have, on the Fourth of July and every day.

"The world is too ugly right now, the way people are -- they don't stop to think and cherish the things they have," Stanley said. "One day isn't enough to give thanks to those giving their lives."

Stanley said he hopes President Trump also has the chance to see his patriotic tribute.