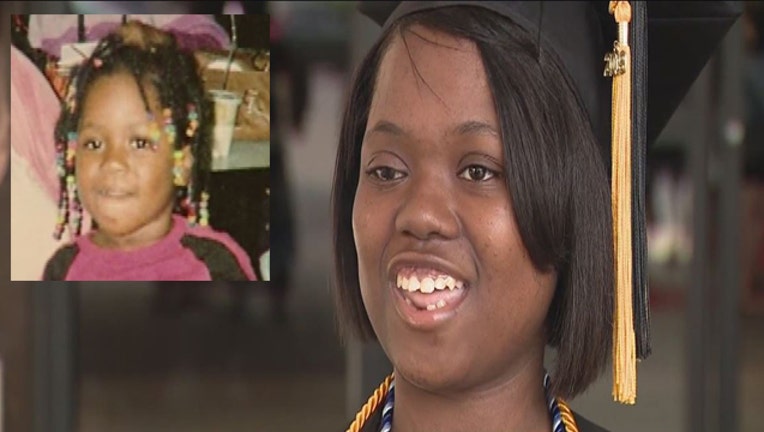 TAYLOR, Mich. - She was a hero, diving in front of a gunman as he opened fire on her mother. Alexis Goggins was hit six times but survived. That was back in 2007 and now, more than 10 years later she hit a major milestone with her high school graduation.

High school graduation is always an exciting time but for her, it means even more. "It was a long road but she made it," says her grandfather, Norman Samuel.

When Alexis was just 7 years old she was on the way to a birthday party with her mom and her mom's friend. Suddenly her mom's ex-boyfriend jumped into the back seat and forced them to drive at gun point. They eventually ended up at a gas station on Seven Mile and Fenelon on Detroit's east side.

The gunman shot Alexis six times, with one of those bullets hitting her eye. He then shot her mom twice. In the chaos of it all - little Alexis threw herself across her mother.

"I see how everything turned out, it was just like a miracle," said Seliethia Richardson, Alexis' mother. "I thank God every day that we're okay, she's okay and we're fine."

In 2008 the Wayne County Prosecutor's Office honored Alexis with an award and commended her for her bravery.

"The fact that this everyday hero award is embodied in an 8-year-old girl, and how she came to court to testify on top of what she went through to protect her mother to us, is just beyond belief," said Prosecutor Kym Worthy at the time.

Now more than a decade later, Alexis is happy about a lot of things.

"Getting work done, getting those As and Bs and making my mom proud," she says.

"I'm overwhelmed, I am probably going to be crying by the end of the night," her mother said.

And on her high school graduation night, this 18-year-old - wise beyond her years - shares some valuable advice for others overcoming challenges: "They can get through it. Believe in yourself."