New Jersey Gov. Phil Murphy gives an update on the state's progress vaccinating its residents. Murphy said the state needs many more doses than it is getting.

TRENTON, N.J. - New Jersey has the infrastructure set up to start vaccinating more people against COVID-19 but doesn't have the supply of shots to meet demand, Gov. Phil Murphy said Tuesday.

Murphy said the state has opened two-thirds of the mass vaccination sites across the state, with more set up at CVS and Walgreens under a federal partnership.

Health Commissioner Judy Persichilli said the state needs 470,000 vaccine doses per week to meet the demand. But the state is getting far less — about 100,000 — each week. 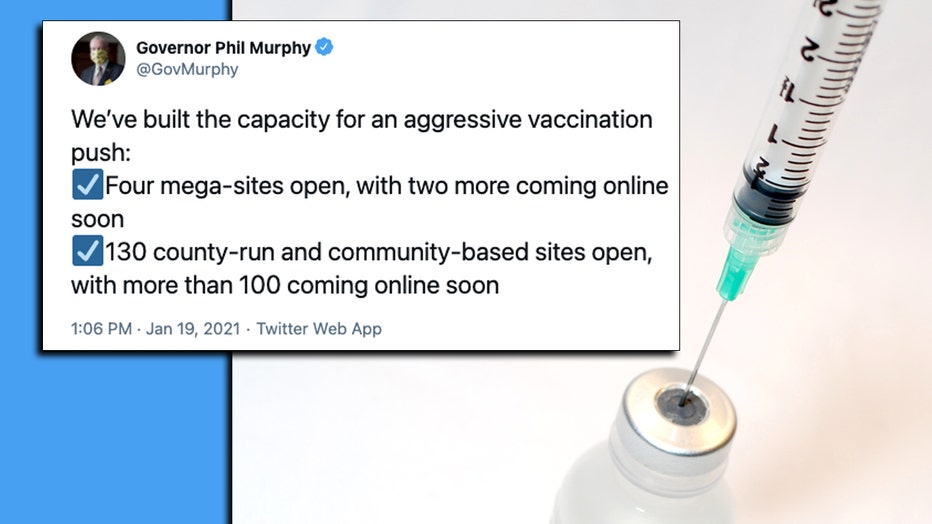 New Jersey has administered about 388,000 doses (to about 3.9% of its population) of the vaccine as of mid-morning on Tuesday.

"All we are missing are the vaccine doses we need," Murphy said.

Murphy predicted that supply would be short "for some time," and didn't specify when or how it would increase. He said he is hopeful that the incoming administration of President Joe Biden would be able to increase the supply of the vaccines.

Persichilli said Monday that a state hotline to answer questions about the vaccine and help people with appointments was operational, though with automated responses. Beginning next week, callers will be able to talk to a person for help when they call, she said. The number is 855-568-0545.

The state also has a website form where residents can report problems with scheduling their vaccination appointment. The webpage states: "We strive to ensure every New Jerseyan who registers to schedule a vaccine appointment can do so without error."

Murphy signed an executive order on Tuesday extending the state's Public Health Emergency, which went into effect on March 9, 2020, and has been extended several times as the crisis has deepened.

"As we continue to work expeditiously to distribute vaccines, the COVID-19 pandemic is still in full swing," Murphy said in a statement. "Continued access to necessary resources is important and critical as cases have continued to climb in New Jersey and across our nation."

New Jersey's seven-day rolling average of daily new cases rose over the past two weeks from 4,787 new cases a day on Jan. 4 to 5,844 new cases per day Monday, according to Johns Hopkins University.

The seven-day rolling average of daily deaths has declined over the last two weeks, from about 85 a day to 75, according to the university.