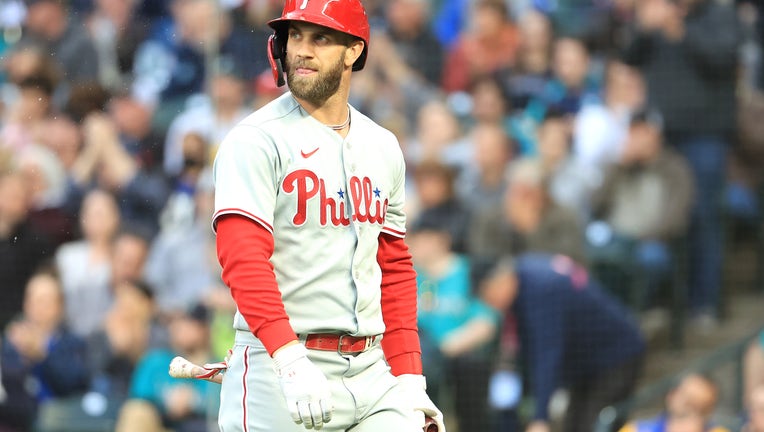 SEATTLE, WASHINGTON - MAY 10: Bryce Harper #3 of the Philadelphia Phillies reacts after striking out against the Seattle Mariners during the fourth inning at T-Mobile Park on May 10, 2022 in Seattle, Washington. (Photo by Abbie Parr/Getty Images)

PHILADELPHIA - Phillies slugger Bryce Harper has a small tear in his right elbow and won't throw for four weeks, but the reigning NL MVP will stay in the lineup as Philadelphia's designated hitter.

Harper was hitting .269 with six home runs, 19 RBIs and an .847 OPS going into the series opener against Los Angeles. He won his second NL MVP award last season.

The 29-year-old star has spent most of his time at DH this year because of his elbow trouble. Of his 31 games, he's played in his usual right field spot just eight times.

The small tear in Harper’s ulnar collateral ligament was revealed during a visit with Dr. Neal ElAttrache in Los Angeles earlier in the day.

"What we saw today confirmed probably a new small tear," Girardi said. "Harp will be no throwing for four weeks. He’ll have a PRP injection on Sunday and we’ll go from there."

Harper was listed as the DH on Thursday and took batting practice before the game.