A hate message was found scrawled on a dry erase board at Moore College in Center City. FOX 29's Shawnette Wilson reports.

PHILADELPHIA - It’s the talk around campus even more than a week after someone scrawled a hate message on a dry erase board at Moore College in Center City. It reads “death to” and then the N-word.

“Even if it was supposed to be a joke people should know it’s not funny to do stuff like that and we’re here for education and not to make people unsafe in the school they go to,” said Kayla Marable. 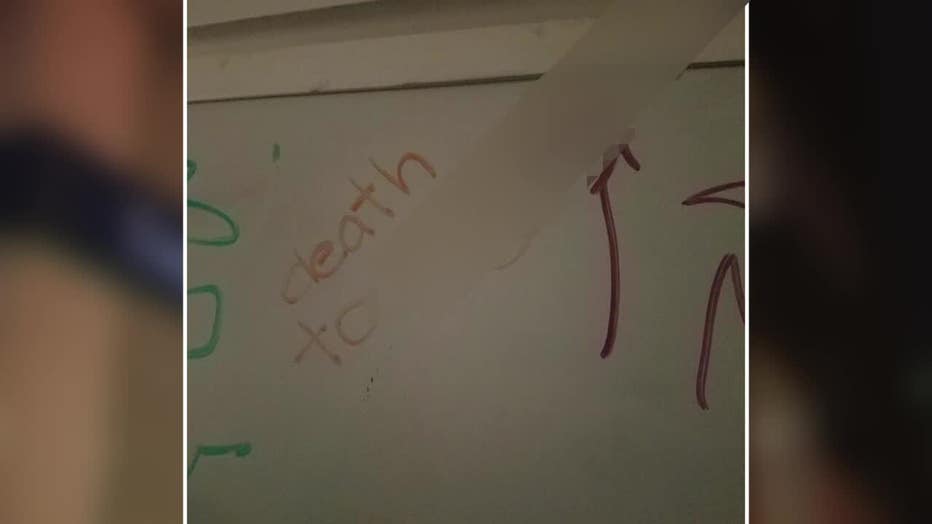 She says she was one of the first to find the threatening hate message before Thanksgiving break. She posted it on social media.

“I know someone earlier in the week saw it but when I posted it people saw it and asked if they could repost it and that’s how it spread," said Marable.  FOX 29's Shawnette Wilson talked to Kayla and some of her friends leaving classes on Wednesday evening. They’re concerned that some students don’t feel this is a safe place anymore.

“They shouldn’t have to feel unsafe in this new area because someone thought it’d be funny to put a death threat in a public space. People are trying to learn,” said Marable.

Students say the message was written on a board that was facing a wall. Marable says she only saw it because she walked around the other side to look at artwork on the board. McKenzie Given and Leanna Izquierdo are angry about what happened.

"Even though it was hateful towards a particular group of people that I am not a part but people that I care about are a part of and having a racial slur on the whiteboard was really scary," said Given.

Izquierdo added, “Definitely kicked out of school because you’re literally threatening a group of people.”

A parent and student sent FOX 29 a letter they say was sent by the school. It reads in part, “This was a thoughtless act, carried out by a few students who clearly did not think through the negative impact this could have on their peers and colleagues." The letter also stated actions will be addressed according to the guidelines of the student code of conduct.  A spokesperson for the college tells Fox 29 they do not plan to comment beyond that.