In his 1968 article "The Tragedy of the Commons," ecologist Garrett Hardin examined the challenges presented when societal interests conflict with the interest of the individual.

Hardin’s essay points to the dilemma of a community of cattle owners — each of whom is incentivized to add additional cattle to the common pasture. Even though it means the yield from each cow decreases, the owner’s loss is offset by the presence of the additional animal.

And without measures in place to protect the common good, the more selfish nature of the owners would lead to overgrazing and the inevitable failure of food production, Hardin concluded.

As laid out in "Vaccination Mandates: The Public Health Imperative and Individual Rights" — authored by scholars Kevin M. Malone and Alan R. Hinman — this argument demonstrates why vaccine mandates have been historically necessary for the United States.

As COVID-19 vaccination rates have stalled in the U.S. and talk of mandates spreads, here’s a look back at the history of vaccine mandates in the country and how the Supreme Court has routinely defended states’ rights to enforce them.

According to the U.S. Centers for Disease Control and Prevention (CDC), a vaccine is a product that stimulates a person’s immune system to produce immunity to a specific disease. It’s not a cure, nor does it guarantee the recipient won’t become infected.

But it is a layer of protection that lessens the severity of an illness, sparing mankind from diseases that once ran rampant like polio, rubella, tetanus, measles and mumps.

They’re typically administered through needle injections, but can also be conducted orally or through the nasal cavity.

Evidence shows the Chinese conducting inoculations as far back as the year 1000, but vaccines have been in the United States since 1796 when Edward Jenner demonstrated inoculation with material from a cowpox lesion would protect the recipient from subsequent exposure to smallpox, according to historyofvaccines.org.

Nearly another century would pass before researchers developed the next vaccine (rabies). The CDC calls vaccinations one of the 10 great public health achievements of the 20th century.

Even so, they’ve been plagued by misinformation and conspiracy theories in recent years that have given rise to an anti-vaxxer movement — which has made it harder for mankind to eradicate certain illnesses that vaccines exist to do.

But the absence of eradication does not doom the population. People can be protected from diseases through herd immunity.

What is herd immunity?

Herd immunity is achieved when a significant proportion of a population becomes immune to an infectious disease, either through vaccination or previous infection, which makes further person-to-person spread unlikely.

In the cattle analogy made by Malone and Hinman, a community free of infectious diseases because of its high vaccination rate can be viewed as a common. And its existence brings the best interest of the community and the individual motivations into conflict.

For instance, herd immunity can be achieved without vaccinating 100% of a population. Depending on the disease, the threshold could be as low as 70% inoculated.

Since the entire population doesn’t have to be inoculated, a portion of it will decline vaccination. Individually, the unvaccinated can receive protection from the herd effect — though their lack of immunity weakens the community’s protection overall.

Think of it in terms of a rowboat. If one person stops rowing, the boat will still move, just slightly slower. And this wouldn’t be of any consequence to the one person abstaining.

If enough people refuse vaccination before herd immunity can be reached, disease outbreaks occur. Malone and Hinman described this fate as another "tragedy of the commons."

They said communities and, more recently, states have avoided it by imposing legal requirements for vaccinations. 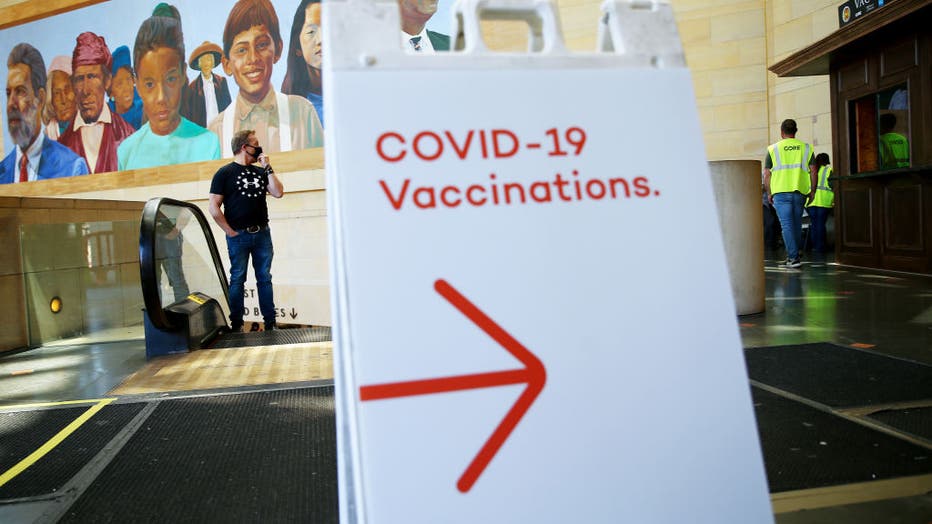 A sign points to a quiet vaccination site set up inside Union Station in an effort to target commuters on June 10, 2021, in Los Angeles, California. (Photo by Mario Tama/Getty Images)

For more than a century, schools have played a crucial role in reducing vaccine-preventable diseases in the U.S.

In 1802, Massachusetts became the first state to encourage smallpox vaccinations. Forty-eight years later, it was home to the first school to require vaccination.

By 1900, nearly half of the states required children to be vaccinated before beginning school. By 1963, 20 states, Washington D.C. and Puerto Rico mandated a variety of vaccines for children.

In the late 1960s, efforts were underway to eradicate measles in the U.S. In the ’70s, states requiring the measles vaccine had incidence rates 40% to 51% lower than the states not requiring it.

Alaska and Los Angeles found themselves among the poorer-performing areas in that regard — forcing health officials to strictly enforce the existing requirements.

In Alaska,  7,418 of 89,109 students (8.3%)  did not provide proof of vaccination and were not permitted to attend school. A month later, fewer than 51 students were still excluded.

In both cases, the number of measles cases plummeted, proving enforcement of vaccine mandates to be an effective public health measure, Malone and Hinman wrote.

Even so, there are ways around them.

Despite their safety and efficacy, vaccines are neither perfectly safe, more perfectly effective. Adverse events, or side effects, are common with inoculations.

Usually, a recipient will experience soreness at the injection site, a fever, chills or a headache.

Some people have conditions that make them more prone to serious adverse events, like allergic reactions. These people are largely exempt from being compelled to take vaccines.

An objection along religious grounds will grant exemption in 48 states and philosophical beliefs in more than a dozen. Some states require proof of membership in a recognized religion while others are satisfied with an affirmation of religious or philosophic opposition.

The Constitution guarantees Americans the right to believe in religions, but many courts have ruled that there is no constitutional right to either religious or philosophical exemptions.

Plenty have argued against the legality of vaccine mandates — reaching the Supreme Court many times. But the courts have routinely protected the rights of states to require vaccinations in the interest of public health.

In Jacobson v. Massachusetts, justices held that a health regulation requiring smallpox vaccination was a reasonable exercise of the state’s police power that did not violate the liberty rights of individuals under the 14th Amendment to the U.S. Constitution.

The Supreme Court recognized the possibility of adverse events following vaccination and the inability to determine with absolute certainty whether a particular person can be safely vaccinated. But it specifically rejected the idea of an exemption based on personal choice.

Doing otherwise "would practically strip the legislative department of its function to [in its considered judgment] care for the public health and the public safety when endangered by epidemics of disease," the Supreme Court said.

In Zucht v. King, the high court ruled against the plaintiff, who used a due process 14th Amendment challenge to argue against city ordinances that excluded children from attendance if they failed to prove vaccination.

SCOTUS ruled that "these ordinances confer not arbitrary power, but only that broad discretion required for the protection of the public health."

With the exception of small outbreaks, vaccine-preventable diseases are largely held at bay in the United States.

But the most immediate vaccine-preventable disease is COVID-19. Vaccine manufacturers developed shots in 2020 that would dramatically reduce the population’s caseload, hospitalization rates and deaths.

And in the months since the Food and Drug Administration authorized them for emergency use, America’s case numbers plummeted from the highs seen last winter.

For all of its troubles — garner the most confirmed COVID cases and deaths in the world — the United States orchestrated one of the most robust vaccination rollouts of any country.

In April, the U.S. reached a vaccine surplus, meaning anyone who wanted a shot could get one with relative ease.

Even so, the vaccination effort peaked in April. Since that time, America is vaccinating fewer than 1 million people a day, compared to the more than 3 million daily inoculations seen in the spring.

And the rise of the more infectious delta variant led to another uptick in cases when June rolled around.

All three FDA-authorized vaccines offer strong protection against the delta variant, according to Dr. Anthony Fauci — chief medical advisor to President Joe Biden. But more breakthrough cases (when a fully vaccinated person becomes infected) have occurred because of it.

Even so, the vaccines have remained effective at keeping recipients out of the hospital and morgue. The White House and CDC have stressed since June that 99% of recent COVID-related hospitalizations and deaths are coming from unvaccinated people.

This would indicate another tragedy of the commons, as explained by Malone and Hinman. What to do about that remains up in the air.

The CDC has asked vaccinated people to resume wearing masks in areas where COVID-19 is surging in order to protect those who are unvaccinated.

For months, private businesses and local governments have sought to incentivize the vaccine by offering entries into lotteries or freebies. But that has done little to move the needle back in the direction it was in the spring.

The White House has not committed to issuing a vaccine mandate. Historically, that’s a power reserved for the states and local governments.

But Dr. Rochelle Walensky, the Director of the CDC, said private businesses could require employees and patrons proof of vaccinations, as well as portions of the federal government.

RELATED: COVID-19 vaccine mandates: Can employers require workers to get the shot?

Many universities have required their students to be vaccinated. The same is true for certain employees of businesses like Disney and Walmart.

Biden has already tasked the Department of Defense with adding the COVID-19 vaccine to the list of required inoculations.