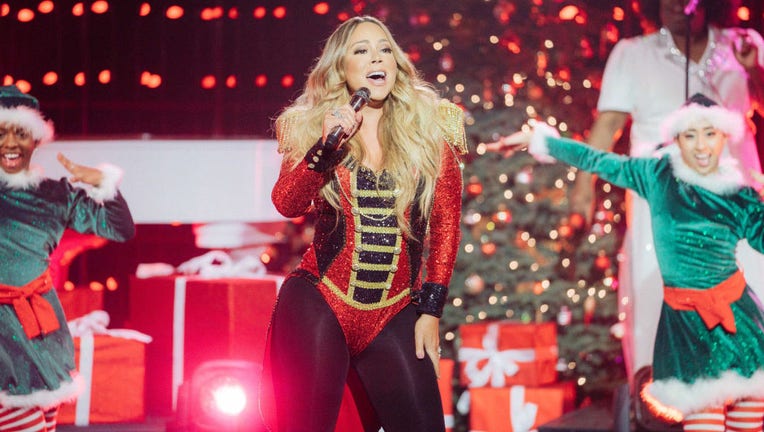 FILE - Mariah Carey performs "All I Want For Christmas is You" from her 25th Anniversary album reissue of Merry Christmas during The Late Late Show with James Corden, on Dec. 19, 2019. (Photo by Terence Patrick/CBS via Getty Images)

It’s December and pretty much every network and streaming service seemingly has a show aimed at spreading holiday cheer. For those looking to skip re-runs of Christmases past, there’s a bounty of fresh shows and specials targeted to traditionalists, romantics, and family-friendly entertainment.

For those hungry for more, or just plain hungry, this guide has you covered on some of the notable musicals, romcoms, animated and cooking shows airing and streaming throughout the holiday season.

RELATED:  Where and when to watch classic holiday TV specials for free

All times are Eastern Standard Time.

"Santa Camp," HBO Max. This documentary follows the non-profit New England Santa Society, made up of more than 100 professional Christmas performers, who decide to tackle the lack of diversity among Santa stand-ins at their annual summer camp in New Hampshire. The group enlists a Black Santa, a Santa with a disability, and a transgender Santa to help make playing Santa more inclusive.

"The 12 Days of Christmas Eve," Lifetime. Kelsey Grammer co-stars opposite his daughter, Spencer Grammer, in this fresh take on "A Christmas Carol," as a successful businessman who is so caught up in success, he forgets about what really matters in life, family. When he gets into a car accident on Christmas Eve, he gets 12 tries at redoing the day over to make things right.

"Christmas with You," Netflix. Freddie Prinze Jr. plays a single dad and music teacher named Miguel, whose daughter Cristina is a massive fan of the pop star Angelina (played by Aimee Garcia). What Cristina doesn’t know is that Angelina’s career is in jeopardy, and she is in danger of being dropped by her record label if she doesn’t release a new hit soon. When Angelina stumbles upon a video Cristina posted online of her singing one of Angelina’s songs, she decides to go meet her for an ego boost. Angelina meets Miguel and offers to help him — and herself — by writing a holiday song with him.

David Lester from Zephyr Cove, Nevada woke up Saturday to find his Christmas decorations in disarray, and the culprit was caught on camera. (Credit: David Lester)

"O Holy Night: Christmas with The Tabernacle Choir," PBS and BYUtv, Dec. 19., Broadway's Megan Hilty, also known for her role on the TV series "Smash," leads this annual concert with the beloved Tabernacle Choir that was recorded in 2021 to air this year. Actor Neal McDonough narrates.

"Mariah Carey: Merry Christmas To All!" CBS, Tuesday, Dec. 20., Mariah Carey first took the Christmas Queen crown in 1994 with her hit single "All I Want for Christmas is You" that's still in heavy rotation today, and she has no desire to give it back. Her latest seasonal offering is a two-hour holiday concert filmed at New York's Madison Square Garden.

The singer first released the song in 1994 as part of her holiday album.

RELATED: Mariah Carey is spreading the Christmas cheer with the 'ultimate holiday experience' for two guests in NYC

"The Sound of Christmas," BET and BET Her, Friday, Dec. 9 at 9 p.m., Ne-Yo, Serayah, and Draya Michele star in this film about a music teacher who meets a wealthy widower with a money-hungry, status-obsessed girlfriend and sparks fly.

"A Christmas Fumble," OWN, Saturday, Dec. 10 at 9 p.m., Eva Marcille stars as a crisis manager who takes on a new client hoping to dodge a scandal (played by Devale Ellis.) The only problem: The two used to date making for a complicated assignment.

"The Holiday Sitter," Hallmark Channel, Sunday, Dec. 11 at 8 p.m., Jonathan Bennett ("Mean Girls," "The Christmas House") is a busy businessman named Sam who is laser-focused on work, until he gets tapped to babysit his niece and nephew while their parents are away. Sam's not the best at uncle-duty and isn't thrilled to meet Jason (George Krissa,) a family friend who seems to have the surrogate uncle job down pat. Each thaw to one another as the days go by in this LGBTQ love story.

"Must Love Christmas," CBS, Sunday, Dec. 11 at 9 p.m., "The Equalizer" star, Liza Lapira, plays a popular romance novelist that specializes in Christmas-set love stories who finds herself stranded in a small, picturesque town... and in a love triangle.

"A Christmas to Treasure," Lifetime, Friday, Dec. 16 at 8 p.m., Real-life married couple Kyle Massey and Taylor Frey star as estranged best friends who reunite for a holiday treasure hunt in their hometown — and the two begin to see each other as more-than-friends.

RELATED: When should you hang Christmas lights? Survey reveals where Americans stand

Heartwarming for the holidays

"The 24th Annual A Home for the Holidays at the Grove," CBS, Paramount+, Friday, Dec. 23 at 8 p.m., This yearly special mixes musical performances with docu-style stories about adoption and foster care, as more than 400,000 children in the U.S. dream of finding a forever home and family. Gloria Estefan hosts and Andy Grammer, Little Big Town, David Foster and Katharine McPhee, and Mickey Guyton will perform.

"Snow Day," Nickelodeon/Paramount+, Friday, Dec. 16 at 7 p.m., is a musical remake of the 2000 comedy film featuring Chris Elliott, Jean Smart and Chevy Chase about hijinks that occur when a record level of snow falls in Upstate New York.

"5 More Sleeps ‘Til Christmas," NBC, Friday, Dec. 23 at 8:30 p.m., This half-hour animated special is inspired by Jimmy Fallon’s bestselling book of the same name and also narrated by "The Tonight Show" host. It's about a boy whose specific plans leading up to Christmas get interrupted by surprise guests, helping him to embrace the true meaning of the holiday.

RELATED: Holiday foods that are surprisingly good for your dog