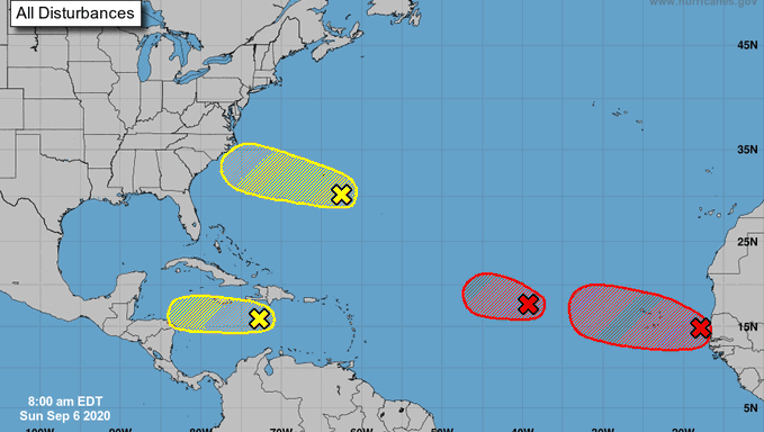 The peak of the hurricane season is just days away and forecasters on Sunday have their eyes on four potential areas for tropical development out in the Atlantic basin.

The U.S. National Hurricane Center (NHC) in Miami said that two systems in the eastern part of the Atlantic basin are "likely" to become tropical depressions over the next five days.

Forecasters said that one area of low pressure located midway between the west coast of Africa and the Leeward Islands is "gradually becoming better defined," but is still a disorganized area of showers and thunderstorms.

The NHC says there's a high, or 90% chance, that a tropical depression forms in the next 48 hours while the system continues to move westward.

If named, this system would be "Paulette" and potentially set a record for the earliest "P"-named tropical system, according to Colorado State University hurricane research scientist Phil Klotzbach.

The second area of disturbed weather is also being monitored for organization as it moves off the coast of western Africa. This area has about an 80% chance of formation over the next five days while it continues to move westward over the far eastern Atlantic.

"Interests in the Cabo Verde Islands should monitor the progress of this system as gusty winds and locally heavy rainfall is possible there on Monday and Tuesday," the NHC said.

In the western portion of the Atlantic, a tropical wave located over the central Caribbean Sea is producing disorganized showers and thunderstorms on Sunday.

The NHC only puts this area at a 10% chance of development over the next five days, adding that any formation would only happen in the next day or two as it moves across the Caribbean.

"After that time, unfavorable upper-level winds should limit its formation chances," the NHC said.

Another area of disturbed weather located a couple of hundred miles southeast of Bermuda is producing showers, but there are only "marginally conducive" conditions for development while the system moves west.

The NHC said there's only a 20% chance of development over the next five days.

This 2020 season has been active so far, with several storms breaking records for their respective letter for how early they formed.