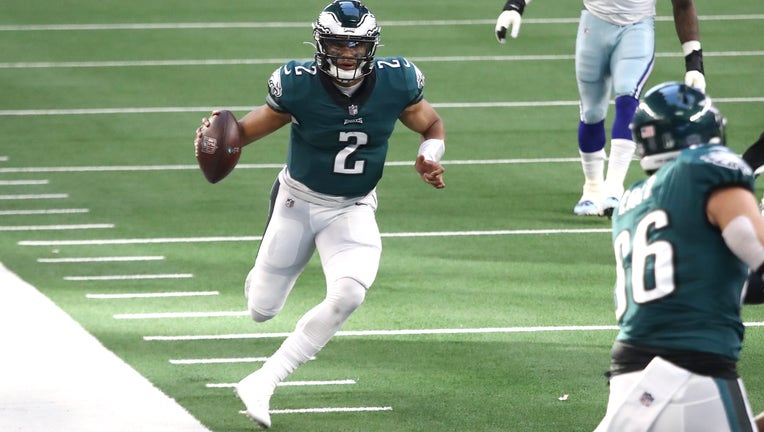 ARLINGTON, TEXAS - DECEMBER 27: Jalen Hurts #2 of the Philadelphia Eagles runs toward the end zone in the first half against the Dallas Cowboys at AT&amp;T Stadium on December 27, 2020 in Arlington, Texas. (Photo by Ronald Martinez/Getty Images)

Hurts actually made a good first impression a couple of hundred miles from his home in the Houston suburbs, throwing an 81-yard touchdown to DeSean Jackson before the Eagles were outscored by 31 points the rest of the way in a 37-17 Week 16 loss last year.

The former Alabama and Oklahoma quarterback gets another shot at Dallas in his first prime-time NFL start Monday night, a matchup of 1-1 teams in their first NFC East meeting of the season.

"I think the the most valuable thing that could happen was just having the opportunity to play a little bit and get my feet wet," said Hurts, who replaced Carson Wentz with four games remaining and took over when the 2016 No. 2 overall draft pick was traded to Indianapolis.

"You could argue that a preseason games or whatever it is, how you look at it now, have an opportunity to have now taken those experiences I’ve had from last year and this offseason and learned from it."

Prescott's season had long since ended when Hurts finished 21 of 39 for 342 yards with two interceptions and three sacks while Andy Dalton led the Cowboys to a victory that kept their improbable playoff hopes alive in what ended up being a 6-10 season.

There have been plenty of milestones during the 2016 NFL Offensive Rookie of the Year's recovery. This could be the latest — playing for the first time on the field where Prescott fractured and dislocated his right ankle, with the 80,000-seat stadium full for the first time in the pandemic, the scene potentially more spectacular with the retractable roof open if the weather cooperates.

Hurts led a dominant showing for the Philadelphia offense in a rout of Atlanta in the opener before struggling in a 17-11 loss to San Francisco. Hurts' 27-yard run, the club's longest of the season, set up a late touchdown, but the Eagles couldn't get the ball back.

FOX 29's Dave Kinchen has reaction from fans who watched the Eagles lose their first game of the 2021-2022 NFL season.

Prescott was phenomenal in his return from the injury, throwing for 403 yards in a 31-29 loss to Super Bowl winner Tampa Bay and seven-time champ Tom Brady. The passing numbers were way down in a 20-17 win over the Los Angeles Chargers, but Prescott led Dallas on the drive to Greg Zuerlein's game-ending, 56-yard field goal.

The Eagles lost Pro Bowl defensive end Brandon Graham for the season because of a ruptured Achilles tendon and three-time Pro Bowl right guard Brandon Brooks was placed on injured reserve with a strained chest muscle. Graham, a team leader on the field and in the locker room, will be replaced by veteran Ryan Kerrigan and Josh Sweat.

"I talked to our guys about the void that has taken place with Brandon and from a leadership and a character and an attitude standpoint, I think collectively everyone has to try to fill that void because not one guy is going to be able to do that," defensive coordinator Jonathan Gannon said.

Second-round pick Landon Dickerson filled in for Brooks after he went down and is expected to make his first career start. "Obviously, there’s things he can improve on, it was his first time playing, but excited about Landon going forward," offensive coordinator Shane Steichen said.

The Cowboys are getting one defensive lineman back but losing two more. Pass rusher Randy Gregory is returning from the COVID-19 list while defensive tackle Carlos Watkins (knee) and defensive end Dorance Armstong (ankle) will be out after getting hurt in L.A.

Rookie Micah Parsons, drafted as a linebacker at No. 12 overall, played almost exclusively as an end against the Chargers while getting his first career sack. It could be more of the same with depth on the defensive line remaining an issue. The most experienced and accomplished end, DeMarcus Lawrence, is likely out until November with a broken foot.

Philadelphia wide receivers had five receptions in the first quarter last week against San Francisco but only one the rest of the game. Hurts completed just 12 passes. Rookie DeVonta Smith had two of the six catches by wideouts.

"We always want to get the ball into our playmakers’ hands," coach Nick Sirianni said. "Obviously a lot of that is what they give to you and what they don’t give to you. But no doubt we’ve got to get our guys the ball and give them an opportunity to make plays."