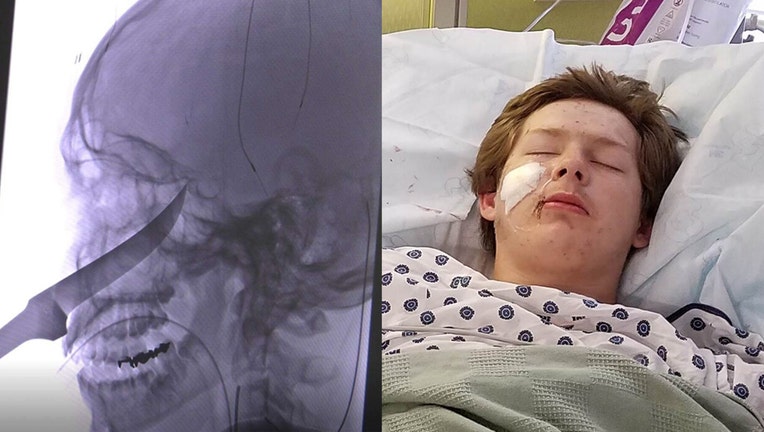 Jimmy Russell said she still isn't sure what happened, but she heard her son screaming before he showed up at the door with a knife sticking out of his face. (The University of Kansas Health System)

(FOX NEWS) -- A Kansas teen is lucky to be alive, let alone talking and joking around, after he was rushed to the hospital with a 10-inch knife sticking out of his skull. Eli Gregg’s mom, Jimmy, said she was making dinner when she heard her kids playing around outside and what she thought was a scream from her 15-year-old son.

“At first I thought it was just normal, and then he came to the door and when he opened the door it was just blood and he had a piece of metal in his face, and it was really shocking,” Jimmy Gregg, who still isn’t sure exactly what happened, said. “I thought it was a metal rod, and then when he came all the way in the door I could see that it looked like a knife handle or something – and that’s what it was and my immediate thought was to call 911.”

Paramedics rushed the teen to Children’s Mercy Hospital Kansas, where doctors saw the potential for damage to the carotid artery in his brain, opening up the possibility for stroke or serious damage, and decided to transfer him to the University of Kansas Health System.

“It could not have had a pound more force on it and him survive that event,” Dr. Koji Ebersole, of The University of Kansas Health System, who helped remove the knife, said. 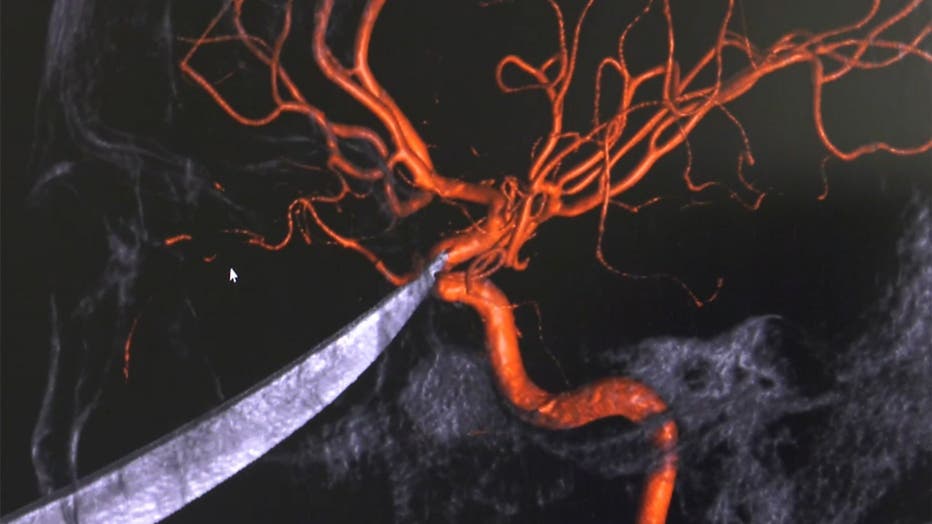 The blade was actually indenting the vessel but miraculously did not cause any damage. (The University of Kansas Health System)

Ebersole explained that the sharp side of the blade was resting on the area of the blood vessel that leads right into Gregg’s brain, meaning that a slight cut or tear would have led to massive bleeding.

“If we get a cut there, it’s going to have overt bleeding that I don’t think we would be able to survive, so we had to come up with a number of strategies to protect that,” he explained.

Doing so meant controlling the blood supply to the area with balloons and catheters before actually removing the blade from Gregg’s face. Another challenge, Ebersole said, was the dangerous nature of the knife, meaning surgeons had to use a surgical vise rather than their bare hands to grip the blade. 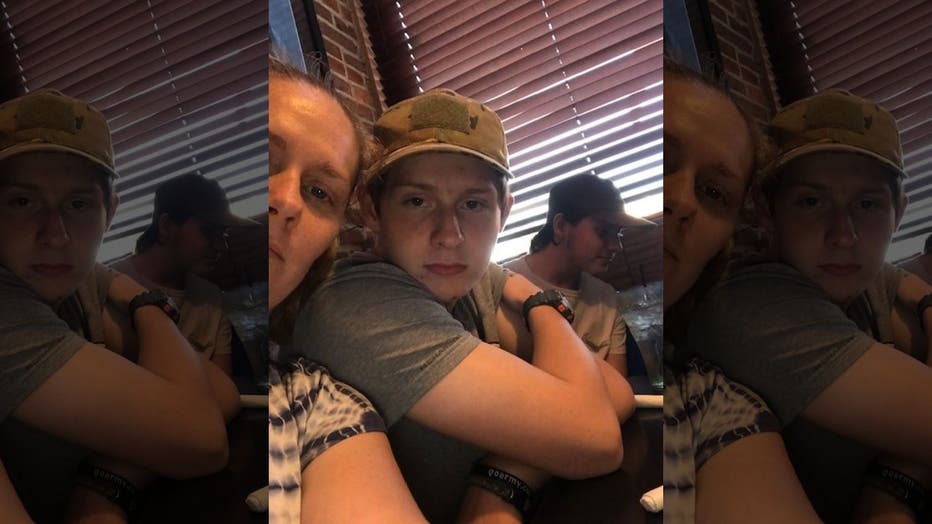 The teen, pictured before his injury, suffered no lasting damage but said he plans to stay away from sharp objects. (The University of Kansas Health System)

The procedure went as well as the team hoped, and less than 24 hours later Jimmy Gregg said her son has returned to his usual self. He’s been placed on antibiotics and will likely need a tetanus shot, but his immediate plans involve staying away from any sharp objects.

“I haven’t really had a chance to process it – everything happened so fast,” she said. “It’s amazing that 24 hours later he’s back and how he is supposed to be. He’s got some healing to do but he’s out of danger for the most part. It’s such a relief.”