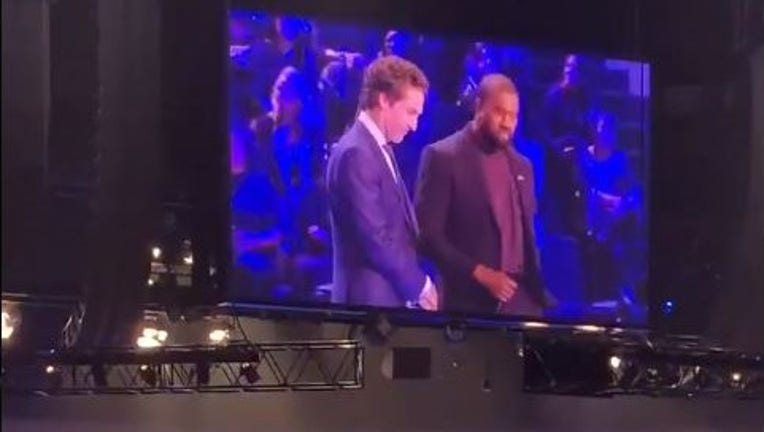 HOUSTON - Pastor Joel Osteen of Lakewood Church played by a snippet of “God Is” on West’s new gospel album “Jesus is King” during service on Sunday.

After a positive reaction from the congregation, Osteen complimented West, saying, “You said more in 60 seconds than I say in my 30-minute message right there.”

When speaking on addiction, he says, “Those addictions are on us, even when you’re saved and delivered… We started off by just have records that were just good (I’ll get to the addiction part), you know nice, easy-to-listen-to records, and good feelings, and I had a friend that came by and said, ‘But you have to say the name Jesus. You can have all of this good-sounding stuff, but eventually people are going to need solid food,’ so we started to incorporate that, and those addictions, these different addictions that all of us have, are things that I like to say bring our Christian score card down.”

Since arriving in Houston, Kanye West, along with wife Kim Kardashian West, were spotted at the Galleria. Social media users posted videos and photos of the couple at the ice skating rink and walking around the mall on Friday.

West and his choir also visited the Harris County Jail on Friday.

The sheriff’s office confirms Kanye performed twice – once for female inmates and once for male inmates.

Kanye West was at Lakewood Church on Sunday. He spoke with Joel Osteen during the Sunday morning service and will perform with his choir in the evening.