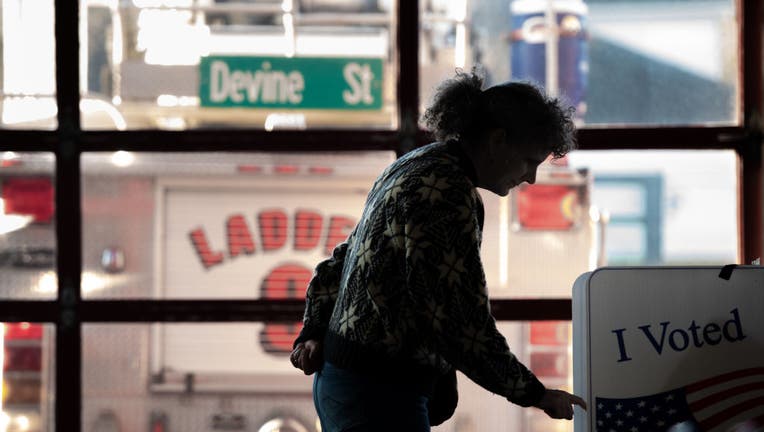 A woman casts a vote in the Democratic presidential primary Feb. 29, 2020 in Columbia, South Carolina. ((Photo by Sean Rayford/Getty Images))

SPARTANBURG, S.C. - The South Carolina primary is certain to be a fork in the road for Democrats’ 2020 presidential nominating contest. But there’s no reliable map showing where voters’ choices might lead once the state's voters — the first 2020 contest where black voters hold the strongest sway — have their say.

RELATED: The South Carolina primary is Feb. 29 — here’s what you need to know

everything you need to know about the South Carolina primary

As the once considerable lineup of democratic hopefuls continues to dwindle, voters of the Palmetto State could make or break the campaign.

Here are some key questions ahead of the first-in-the-South primary on Saturday:

FOR BIDEN, A FIREWALL OR A SPRINGBOARD?

Former Vice President Joe Biden is the clear favorite, with strong advantages among black voters and white moderates. A similar winner’s aura developed for Sen. Bernie Sanders in Nevada. The question may be how close Biden can come to replicating Sanders’ blowout win in the West’s first caucuses. He needs a big win, bigly.

Biden has always called South Carolina his “firewall,” perhaps unwittingly admitting that his campaign would need the state to survive. Yet over a week of campaigning, Biden and some aides found themselves talking not about a “firewall” but a “springboard” or “launching pad,” as the state was for Hillary Clinton in 2016 and Barack Obama in 2008.

Biden had one of his better debates and a strong CNN town hall, he got many adoring crowds (all of them reminded that he was Barack Obama’s vice president) and an endorsement from Rep. Jim Clyburn, the rare political figure whose backing can move votes. Biden also watched Sanders struggle with the front-runner’s mantle while billionaire Mike Bloomberg suffered more fallout from his own uneven debate performances.

Still, there are no guarantees for how a South Carolina win for Biden plays forward into Super Tuesday. Early voting in California and Texas has been ongoing, potentially buffering both Sanders and Bloomberg and limiting Biden’s potential rebound.

CAN BERNIE IMPROVE AMONG BLACK VOTERS?

Sanders’ insurgent 2016 presidential campaign met its undoing in South Carolina, even if the Vermont senator stayed in the race through the end of the primary calendar.

It’s easy to forget amid all the talk of Sanders as the 2020 front-runner that he started that 2016 campaign quite well, too. He battled Hillary Clinton to a draw in Iowa, trounced her in New Hampshire and lost a hotly contested Nevada caucus.

But in South Carolina, Clinton pummeled him by more than 40 points, earning the support of more than 3 out of 4 African American voters. She replicated that success across a racially diverse Super Tuesday slate, and Sanders could never catch up.

For 2020, Sanders has been more intentional about courting nonwhite voters. That turned his 2016 Nevada deficit into a huge win last Saturday, and it has him well positioned in California and Texas, Super Tuesday states that combine for more than 600 out of the 1,991 delegates required for the nomination.

Given that strength, Sanders doesn’t necessarily have to win the black vote, but he might need to narrow Biden’s advantages.

DOES SOUTH CAROLINA WINNOW THE FIELD?

Biden has said for months: “You can’t become the Democratic nominee without overwhelming support from black and brown voters.” That’s an exaggeration. It's certainly true that any nominee with a nearly all-white base has no shot at the nomination. That could spell the beginning of the end for several candidates: former Mayor Pete Buttigieg of South Bend, Indiana, Minnesota Sen. Amy Klobuchar and Massachusetts Sen. Elizabeth Warren.

A late-week Buttigieg turn illuminated their challenge. The 38-year-old, who has faced considerable pressure over his dealings with the black residents of his Indiana city, had scheduled a roundtable with several black South Carolina mayors. The campaign canceled the event once several of the mayors bailed on the meeting after Clyburn, the most influential Democrat in South Carolina and the highest-ranking black member of Congress, endorsed Biden.

Buttigieg, Klobuchar and Warren could fall short of capturing delegates in South Carolina, forcing a new round of questions about their ability to build a coalition that looks like the Democratic Party. But presidential campaigns usually don’t end until the money runs out, so the question isn’t whether any of them drop out after South Carolina — they almost certainly won’t — it’s what their donors decide about what South Carolina means in the overall process.

WHAT ABOUT THE WHITE DEMOCRATIC VOTERS?

Black South Carolinians get much of the spotlight, and deservedly so since it’s the first Democratic contest with an often-determinative black contingent.

But a third or more of the electorate Saturday is likely to be white, and in the South, that group leans more moderate or at least pragmatic than the other three states.

How they decide among the many non-Sanders candidates will be telling. And it’s worth noting that white South Carolina Democrats, because they share a state party with so many African Americans, are more likely than white Democrats in overwhelmingly white Iowa or New Hampshire to consider candidates’ appeal across racial lines.

“I have heard several (voters) who have changed their votes in the past couple of days, who like other candidates but are going to support Joe Biden because they feel he has a better chance to win," said James Smith, South Carolina Democrats’ 2018 nominee for governor and a Biden supporter.

Beyond South Carolina, Biden needs that same kind of consolidation away from Bloomberg, who isn’t on the South Carolina ballot. But he drew much of his support nationally from more moderate voters, many of whom are white and who saw Biden as weak heading into Iowa and afterward.

STEYER: A BILLIONAIRE’S TEST FOR BLOOMBERG

Bloomberg’s staggering spending on Super Tuesday states has overshadowed the fact that there’s another billionaire in the race.

Tom Steyer has topped the spending charts in February contests. Yet the California environmental activist has yet to secure a single delegate in Iowa, New Hampshire or Nevada.

He’s placed special effort on South Carolina, with some polls suggesting he got a foothold. But he also could recede — as he did in Nevada — if the apparent Biden momentum builds. That could be a harbinger for Bloomberg on Super Tuesday.

The former New York mayor doesn’t explicitly say it, but his entire campaign has hinged on the idea that he’d become the competent, centrist stand-in once Biden collapsed in the early states. But if Steyer’s mega-spending can’t mount a notable delegate haul in any early state, it may not bode well for Bloomberg’s return-on-investment as he awaits voters’ judgment on Super Tuesday.