BETHLEHEM, Pa. - All eyes were on the sky in the Lehigh Valley Sunday morning as hundreds gathered to watch history crumble.

The historic 21-story Martin Tower imploded into pieces in a controlled demolition.

The building once served as the world headquarters for the now defunct Bethlehem Steel Corporation. It was also the tallest building in Pennsylvania outside of Philadelphia and Pittsburgh. 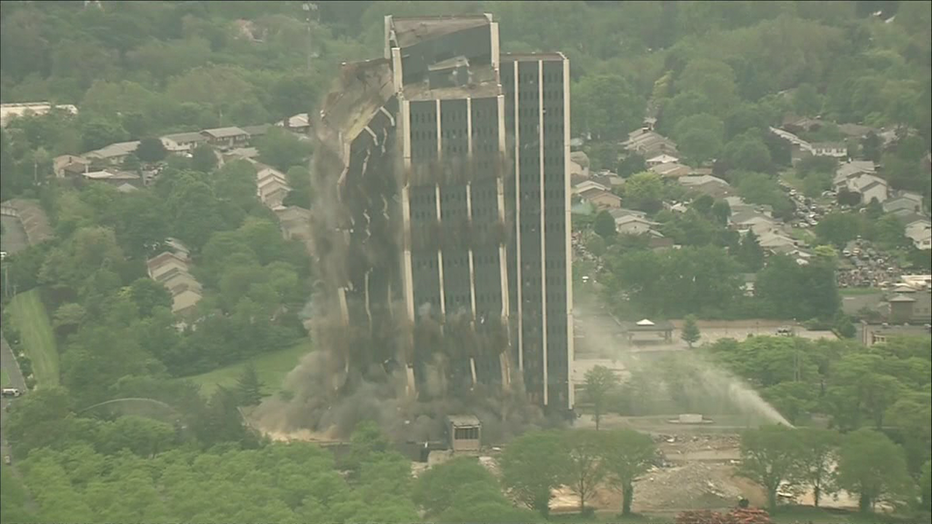 "All of the sudden, it was like fireworks, and all right at once, it was pretty cool," Nelson Mendoza said. Mendoza drove right to the police perimeter to catch the implosion after working a night shift in the city.

A sea of bystanders posted up in parking lots and along city streets to get a close look. Others traveled from out of the state to witness the building fall.

"It was worth getting up for," New Jersey resident Anthony Tolotta said.

For longtime Bethlehem folks, it brought a range of emotions.

The highly-anticipated demolition comes after more than a decade of the building sitting vacant. Mayor Robert J. Donchez said developers tried to market the building, but it never took off.

Once word of the demolition got out, some people tried to stop it from happening and even started a Change.org petition, but their efforts failed.

"It was a place where we always told everyone turn right at Martin Towers or turn left at Martin Towers," Bethlehem native, Jean Perez said. "Wherever you looked, it was always there to find your way home."

Perez said she got emotional during the implosion. Her childhood memories surrounded her father working at the building up until the final days of his life.

"His last days were at Martin Towers where he retired from, and it was very sad because I remember going in the parking lot to meet him coming out."

For some, the towers were a painful reminder of the town's decline and instead, they feel the demolition is a sign of progress and rebuilding.

"I think as the area continues to grow, I think it will be an opportunity for more jobs and help us continue to grow the Lehigh Valley," Dave Venebal said

There are plans for the space to eventually become a multi-use complex with housing, offices, and retail space. In the meantime, the focus is on the clean-up.