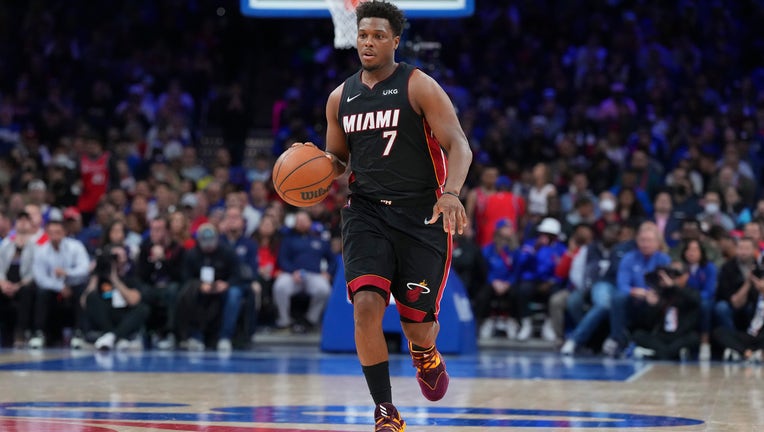 PHILADELPHIA, PA - MAY 08: Kyle Lowry #7 of the Miami Heat dribbles the ball against the Philadelphia 76ers during Game Four of the 2022 NBA Playoffs Eastern Conference Semifinals at the Wells Fargo Center on May 8, 2022 in Philadelphia, Pennsylvania

MIAMI - Kyle Lowry's strained left hamstring has sent him back to the bench.

Lowry's leg issue forced the Miami Heat to rule out their starting point guard for Game 5 of their Eastern Conference semifinal series against the Philadelphia 76ers.

He missed four games earlier in the postseason because of the hamstring problem, then aggravated it in Miami's Game 4 loss on Sunday. Lowry continued playing through much of that game, limping at times and finishing 3 for 10 from the floor, 0 for 6 on 3-pointers in Miami's 116-108 loss.

"I know how competitive Kyle is and how much he wants to be out there, particularly at this point in his career," Heat coach Erik Spoelstra said Tuesday. "This is what he's playing for, these moments. ... I do feel for him."

The Heat and 76ers are knotted at 2-2 going into Tuesday's fifth game of the series. Lowry was with the Heat for their gameday shootaround practice Tuesday morning — "as active as anybody," Spoelstra said — and will be listed as day to day going forward.

Game 6 is Thursday in Philadelphia. Game 7, if necessary, would be Sunday in Miami, which is also the first possible start date of the Eastern Conference finals.

Lowry got treatment Monday and was hopeful of getting onto the court for Game 5. It didn't take the Heat long to determine that wouldn't be possible.

"I’ll put it this way: You don’t want to play with it," Lowry said after Game 4 on Sunday night.

Lowry went 3 for 14 in the two games at Philadelphia, missing all eight of his 3-point tries. He originally got hurt in Game 3 of the first-round series against Atlanta.

"Oh, I’m sure it affects him," 76ers coach Doc Rivers said Tuesday. "I don’t know how much, but I can’t imagine having a hamstring in the playoffs and playing with it. It has to have — even if it’s not physical — absolutely has to have a mental effect. There’s no doubt about that.

Miami enters Tuesday with a 16-7 record in games that Lowry has missed this season.

"I know how much he wants to be out there," Heat guard Tyler Herro said, adding that Lowry's leadership will be missed. "He's obviously not out there, so we need another voice out on the court that can help us get into our spots."

Lowry played that role — the ‘another voice' that Herro spoke of — from the bench in Games 1 and 2, and Spoelstra expects the same during this absence.

"He’s so sharp," Spoelstra said. "He sees things ahead of most people — that would be players or staff alike. And he has just a brilliant way of communicating and infusing confidence."