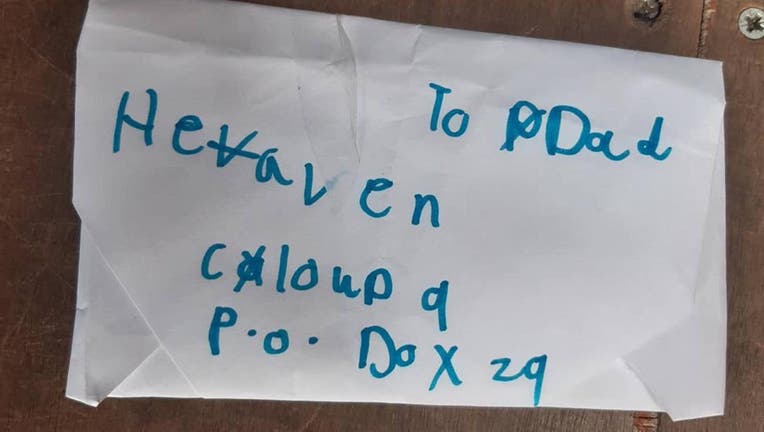 A mailman returned a letter to a young girl that was addressed to her "dad in heaven." (Spotted Braunstone Town & Estate/Facebook)

A mailman has a heart-warming delivery for a child who lost her father.

The Leicester, England-based mail carrier, who did not reveal his name, used Facebook to find the return address from a letter written by a little girl made out to her "dad in heaven."

He shared a photo of the envelope featuring the sweet sentiment sent out for Father's Day.

"Earlier today I emptied the red pillar box on Bewicke Road (junc. of Folville Avenue) and there was a letter in a child’s handwriting addressed to their dad in heaven, cloud 9," he wrote on the Spotted Braunston page.

"I’m trying to find the parents of the child as I would like to reach out to them and with their permission sort out a little something for the child," he added.

The mail carrier also shared that he has lost his own father.

"…and as an adult found it so hard so I can only imagine what this child is going through," he wrote on the post, while asking people for information on where to send back the letter.

The heartfelt query got a response when the mail carrier was put in touch with the child’s mother, Sarah Tully, who started receiving an influx of tags on Facebook.

"My phone was pinging. I opened Facebook and there it was. I was so shocked, I said to my older daughter, ‘Oh my God, that’s Sianna’s letter,’" Tully told FOX News.

Tully said Sianna has been writing her late father, who died when she was four months old, letters and sharing photos on holidays like his birthday and Father’s Day since she was old enough to write.

"She’s really just getting to understand it all. She was so young. We have pictures all around for her to see him," Tully said.

When Sianna asked her mother where her father lives so she could keep writing the sweet holiday messages, Tully said she replied, "Heaven, on Cloud Nine," LeicestershireLive reported.

It didn’t take long for people to share an outpouring of support in Facebook comments of the letter, applauding the act of kindness.

"Beautiful to read – I lost my dad unexpectedly last month," one commenter shared.

"What a poignant post to make us remember those whose dads aren’t around … and to love and appreciate him while he is," another commenter wrote.

Tully, who received the letter back, said she will share the sweet exchange with the mailman when Sianna is older.