A video released by Alaska State Troopers shows the moment officials found Tyson Steele in a makeshift shelter about 20 miles outside of Skwentna, Alaska on Thursday.

(FOX NEWS) -- A man managed to survive more than three weeks in the rugged Alaskan wilderness after his remote cabin burned down until he was rescued last week by state troopers who spotted an "SOS" signal stamped in the snow.

Alaska State Troopers said in a news release that 30-year-old Tyson Steele was found Thursday at a makeshift shelter at his remote homestead about 20 miles outside of Skwentna, located about 70 miles northwest of Anchorage. Officials were conducting a welfare check on Steele after he had not been heard from for "several weeks" when they arrived in a helicopter in the remote area to find the 30-year-old waving for help and "SOS" stamped in the snow.

"Steele’s shoulder-length hair, chestnut brown near the roots fading to golden blond near its frayed tips, hung matted and dreadlocks-like over his neck. His auburn beard flowed untrimmed to his chest," Alaska State Trooper Ken Marsh wrote in a recap of the rescue. "The combination made him seem vaguely reminiscent of actor Tom Hanks’ character in the movie 'Cast Away.'" 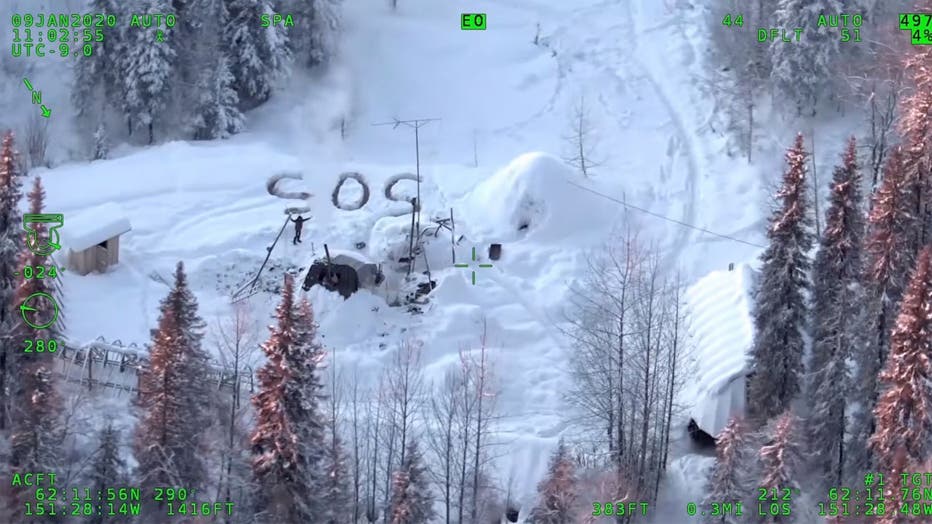 "He had no snowmachine. And his nearest neighbor was 20 miles away, in the tiny community of Skwentna," State Trooper Ken Marsh noted. (Alaska State Troopers)

State police said that Steele had been in the makeshift shelter since Dec. 17 or 18, when the roof of his cabin had caught fire after he burned a "big piece of cardboard" in his woodstove. He believed a spark from the cardboard ended up setting the roof ablaze of the cabin he had been living alone in since September.

While recounting the events with state police after his rescue, Steele said he managed to grab a handful of supplies from his burning cabin but most of his possessions, including his six-year-old dog Phil, didn't make it.

"The fire is just a huge, massive grease fire. Every shovel of snow that I throw on it – I’m hysterical trying to put it out and it’s not doing anything," Steele told state troopers. "And I worked up into the morning, into the light trying to put out various sections of the fire."

The mid-December fire had left him with no way to communicate, Steele told troopers. Besides having a non-working phone and no map, the 30-year-old was in a location with miles of forests, hills, rivers, and lakes that left him separated him from the road system.

"He had no snowmachine. And his nearest neighbor was 20 miles away, in the tiny community of Skwentna," Marsh noted. "Steele’s only way in or out of the wilderness was by air charter." 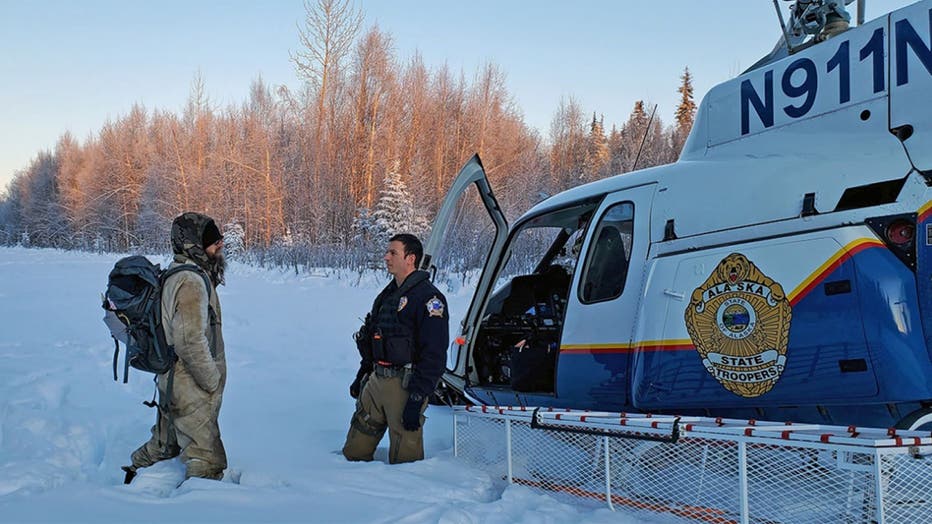 Tyson Steele, left, speaks with Helo 3 Tactical Flight Officer Zac Johnson upon being rescued after more than 20 days stranded in the wilderness after his cabin burned down. (Alaska State Troopers)

The 30-year-old said he was concerned about trying to make the trek and falling through rivers that had not yet frozen over, and he only would have about six hours of daylight to attempt to travel through "a tremendous amount of powder" from recent snows. His snowshoes had burnt up in the blaze, and he was only left with boots and "crappy socks that were full of holes" to walk through feet of snow.

"I had a headlamp for maybe 10 or 11 days, but I only had the batteries that were in there," Steele told state troopers. "So, I ran out of light.”

Steele said the entire time he remained hopeful that someone would contact the air service to look for him after not hearing for him.

The first two nights after the blaze Steele spent in a snow cave before he was able to put together a makeshift shelter from what remained from his now-burned out cabin, scavenging together tarps and scrap lumber to build a tent-like shelter around the woodstove.

"Once I got the second shelter built, I kept a fire in the woodstove perpetually. And I basically use that to heat up my food," he recounted to police. "It’s not about keeping the shelter warm, because it basically just took that edge off." 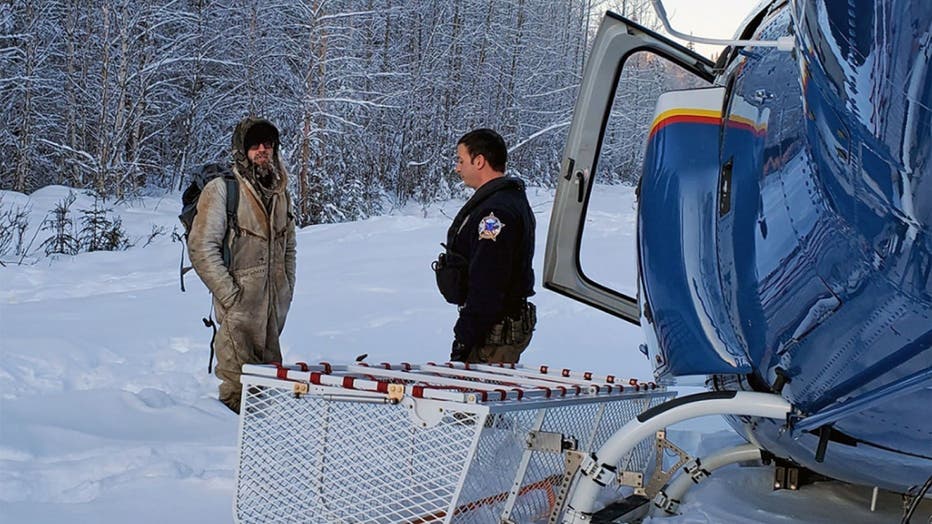 Steele managed to salvage an old set of greasy, charcoal-smudged overalls from a shed after the fire since all the clothes he had other than the long johns and wool sweater he was wearing were lost in the blaze. He also rationed some 30 days of food that he was able to salvage since a lot was melted or destroyed in the fire.

"I'm allergic to pineapples," he told FOX13 on Saturday after making it home to his family's home in Utah. "I ate them anyway because it's what I had."

Among the items to burn in the cabin fire were all of Steele's bullets which were in an ammo box that exploded and was like "a war zone" during the blaze.

"It was just 500 rounds going off all at once," he recounted to state police.

Speaking to FOX13 on Saturday, the 30-year-old said he was grateful all his bullets were lost so it was not a "temptation" to end his life when he thought he may not survive in the wilderness.

Alaska State Troopers said when the 30-year-old was discovered during the welfare check on Jan. 9 he was transported by helicopter to the Alaska State Trooper’s Aircraft Section Hangar at Lake Hood. Rescuers set him up with a shower and fulfilled his request for a McDonald’s Combo Meal #2.

"His clothes smelled of smoke and his hands were calloused, rough, and ash-stained," Marsh wrote. "Nonetheless, he appeared healthy overall and energetic as he nursed a tall cup of McDonald’s coffee. He seemed happy to talk, and certainly to have survived 22 or 23 days in the wilderness."

Steele told police his plans, for now, are to go Salt Lake City to be with his family before eventually making a return to Alaska.