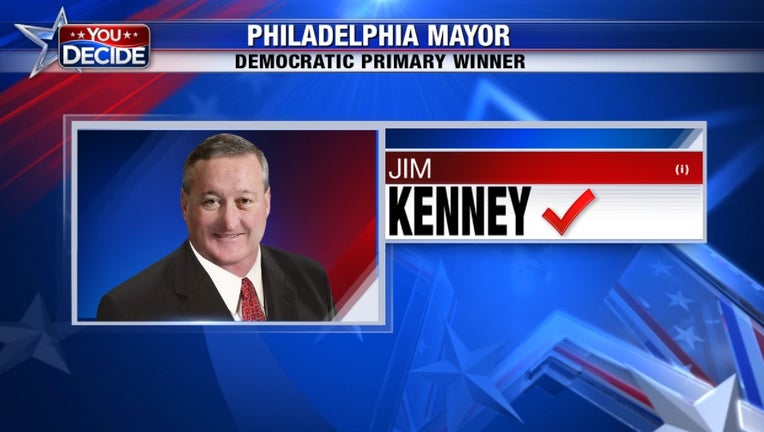 Philadelphia Mayor Jim Kenney is poised to keep his job after fending off two challengers in the city's Democratic primary.

PHILADELPHIA - Democrat Jim Kenney is poised to keep his job as mayor of the nation's sixth largest city after fending off two challengers in Tuesday's primary who criticized his signature achievement: a soda tax to help provide free preschool classes.

The victory all but assures Kenney will stay on as mayor in Philadelphia, where Democrats outnumber Republicans by a nearly 7-to-1 ratio, and the city has not elected a Republican mayor in nearly 70 years. Republican Billy Ciancaglini ran unopposed in the GOP primary.

Kenney has had an eventful first term, antagonizing President Donald Trump over Philadelphia's sanctuary city status and carrying out the tax on soda and other sweetened drinks, which inspired several other cities around the country to enact their own.

Two longtime city political figures ran against him: state Sen. Anthony Williams, who has served three decades in the state House and Senate combined, and Alan Butkovitz, the former city controller defeated in 2017.

Both derided the soda tax as regressive and were banking on voter outrage over the tax to propel them to victory. They also argued Kenney, 60, hadn't done enough to combat other major problems plaguing the city, including crime and poverty.

No incumbent mayor has lost their bid for re-election in seven decades and Kenney, never seemed concerned, calling his challengers "annoying gnats" in a radio interview.

The soda tax had been a flashpoint in the election.

It has generated more than $130 million, which is paying for free preschool programs and other community services like revamped recreation centers and libraries.

It has also drawn criticism from some consumers and businesses but withstood court challenges and a public relations onslaught by grocers and the beverage industry.

In a brief and a rapid-fire victory speech, Kenney did not directly mention the soda tax but spoke about his efforts to improve the public education system in Philadelphia, noting he "took on an entire industry" in order to fund pre-kindergarten classes.

"I believe education is the best pathway out of poverty," he said.

Philadelphia's enactment of the 1.5 cent-per-ounce tax on soda and other sweetened beverages - at the distributor level - has inspired other municipalities to follow suit, with varying results.

A new study found that Philadelphia's 2017 tax led to a 38% decline in sugary soda and diet drink sales that year, even when taking into account an increase in sales in neighboring towns. It bolsters evidence that soda taxes can reduce sales, but whether they influence health remains unclear.

Kenney didn't try to sell the tax as a way to discourage people from drinking unhealthy beverages. Instead, he billed it as a way to help lift citizens out of poverty by improving early childhood education and rebuilding and renovating recreation centers, parks and libraries around the city.

The mayor's office, in a statement May 14, said the study is "entirely supportive" of the mayor's stance on the tax. They disputed beverage industry's claims that it has led to job losses.

The city recorded 350 homicides in 2018, the highest in over a decade - and the numbers are currently running higher than they were last year at this time.

Philadelphia is also the nation's poorest big city, with a poverty rate of nearly 26%.

And its opioid crisis is among the worst in the U.S., with more than 1,100 fatal overdoses in 2018. Kenney and other city officials announced last year that they'd support a private entity operating and funding supervised injection sites - locations where people can shoot up under the supervision of a doctor or nurse who can administer an overdose antidote if necessary.

Both Williams and Butkovitz opposed such sites, citing the legal uncertainty and community concern over putting such sites in their neighborhoods.

One thing the candidates all agreed on is the city's status as a sanctuary city.

Sanctuary cities - like Philadelphia, New York and San Francisco - are places where authorities don't work with Immigration and Customs Enforcement to round up those living in the country illegally. A federal appeals court ruled in February that the Justice Department can't deny Philadelphia millions in public safety funding because of its sanctuary city status.

Republican Fred Keller, a conservative state lawmaker, won the special election for Congress in a heavily Republican district that sprawls across areas of central and northern Pennsylvania that are a stronghold for President Donald Trump.

Keller will replace Republican Tom Marino, who resigned in January after he emerged as a strong Trump ally in Congress.