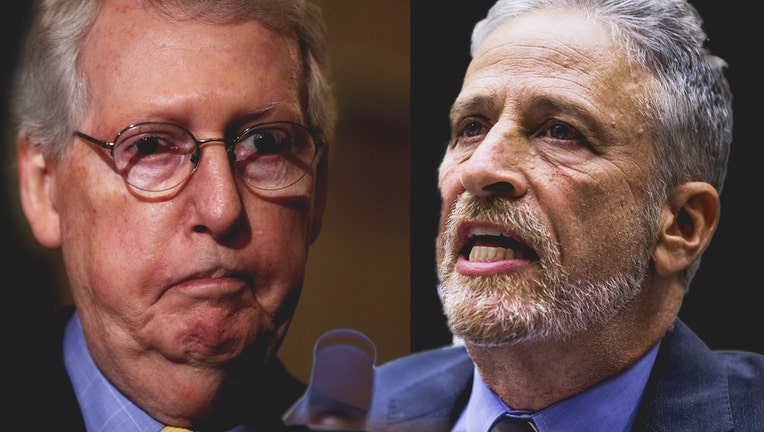 WASHINGTON - Senate Majority Leader Mitch McConnell has agreed to call a Senate vote on a bill ensuring that a victims' compensation fund for the Sept. 11 attacks never runs out of money.

McConnell made the commitment after meeting Tuesday with a group of first responders.

"We want to try to deal with (the legislation) before the August recess," the Kentucky Republican told ABC News, adding that he had a "good meeting" with the first responders and even received the shield of a retired New York City detective who now is suffering from cancer after working for weeks at the World Trade Center site.

The meeting came two weeks after comedian Jon Stewart, a longtime advocate for 9/11 responders, offered withering criticism of Congress at a public hearing at the Capitol that was attended by uniformed firefighters and police officers but few lawmakers.

McConnell now has "a sense of urgency" about the bill and wants to see it approved before Congress goes on its August recess, said John Feal, a recovery worker at the World Trade Center site and a longtime activist.

Approving the bill in the House and Senate by August would be "way ahead of schedule" and a credit to McConnell and advocates such as comedian Jon Stewart, Feal said.

Stewart has criticized McConnell and other congressional leaders for failing to ensure that the victims' fund, set up after the 2001 terrorist attacks on New York and Washington, is replenished.

The $7 billion fund is being depleted and has cut benefit payments by up to 70 percent. A bill pending in Congress would ensure the fund can pay benefits for 70 years.

Stewart, the former host of "The Daily Show," mocked McConnell on Stephen Colbert's late-night talk show last week, accusing the GOP leader of slow walking the legislation and using it as a political pawn to get other things done.

Jon Stewart criticized Congress for failing to ensure that a victims' fund set up for 9/11 victims and first-responders never runs out of money.

McConnell said last week that the issue will be addressed and that he does not know why Stewart was "all bent out of shape."

Feal called Tuesday's meeting with McConnell "one of the best meetings" he's had at the Capitol in more than 15 years of advocacy on the issue.

He and other first responders were "ready to shake hands" on a deal or "ready to get into a street fight," Feal said, adding that in the end, no drama was needed.

The Senate leader said last week that Congress has always acted in a compassionate way on the 9/11 fund, a statement Feal strongly disputed. The fund has always had a five-year sunset provision, among other problems, Feal said.

Feal told reporters that he gave McConnell "my version of what compassion is ... and I think we left the meeting now knowing what our compassion is, and he has to match that. And I think he will."

Feal, who lost part of his left foot in an accident during recovery work after the attacks, credited Stewart with raising the profile of first responders still suffering from respiratory ailments and other illnesses related to the attacks.

Stewart "put our 18 years of pain and suffering" in public view at a House hearing June 11, Feal said. First responders shared similar stories with McConnell at Tuesday's meeting, he said.

The bill to replenish the fund must pass the House first. Majority Democrats have promised a vote before their August recess.