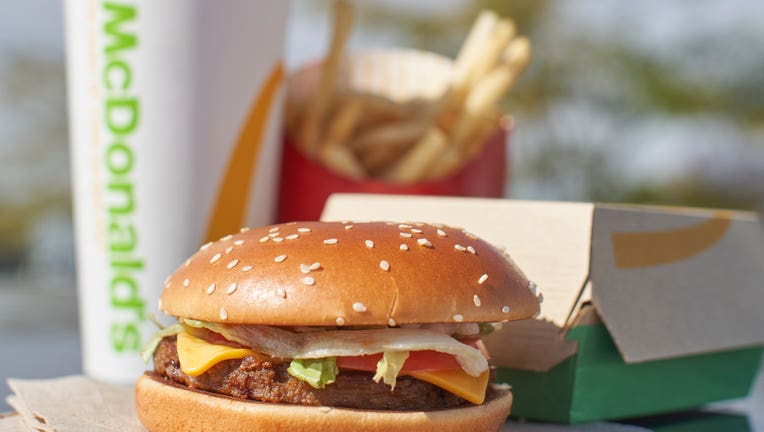 FOX NEWS - McDonald’s Australia wants everyone to give its newest eating trick a hand — but only one.

The fast-food chain shared a four-step guide – complete with helpful arrows – on how to eat an entire hamburger meal with one hand, and it has gone viral on social media.

The brand’s self-proclaimed “meal hack” involves first procuring a drink, fries and one of the various hamburgers the fast-food chain sells that comes in a box. Then, the customer is asked to precariously balance said box open on top of the drink. The third step involves pouring the full box of fries into the empty side of the open box. And finally, the fourth step asks you to apparently sit back and admire your work.

The diagram does not explain where one would place a sauce packet for dipping purposes. It also does not mention that the one-handed meal hack still involves both hands — one to hold the beverage, and one to eat the food.

Rest assured, though, the entire four-step procedure does not involve a hammer, screw or Allen wrench, as McDonald’s illustrates on the side. However, it does only work if you have a sturdy straw — an instrument the chain has been working toward eliminating and replacing with paper straws that many have referred to as “soggy.”

With or without the controversial straw, Instagram does not seem to be lovin’ the “meal on the go” option.

“Imagine being this lazy,” one person wrote.

“Putting hot food on top of a cold drink ain’t a good idea lmao,” another wrote.

“My burger just fell on the ground… screw you,” another who claimed to have tried the trick wrote.

“Mine fell. Don’t do it you will have to buy another one,” another Instagram user wrote.

“If [you] lift the burger up…the fries are dropping on the ground,” another alleged tester commented, throwing a really Allen wrench into the chain’s promise that this can be eaten on the go.

“Not much help if you get a cheeseburger wrapped in paper,” one person pointed out.

This is not the first time a unique repurposing of McDonald’s signature packaging has gone viral. A while ago, awitter user gained popularity for claiming to discover the famous McDonald’s fry carton’s “purpose.”

In a tweet, the user suggested the carton was meant to be bent back and used as a platform to pour ketchup on. However, the clever hack was hotly debated by those on social media.