LUCEDALE, Miss. - A highway in Mississippi collapsed on Monday night, resulting in a multi-vehicle crash that left two people dead and at least 10 others injured, officials said.

The collapse was reported along a portion of Highway 26 in George County, about 60 miles northeast of Biloxi. The Mississippi Highway Patrol, emergency personnel and rescue teams responded to find both the east and westbound lanes collapsed, according to FOX 8 WKRG.

Cpl. Cal Robertson with the Mississippi Highway Patrol said the collapse appeared to be around 50 to 60 feet in length and 20 to 30 feet deep.

Robertson said seven vehicles were involved in the crash and that some of the cars were "stacked on top of each other." Cranes will be needed to get the cars out of the hole, he said.

The identities and conditions of those involved in the accident have not yet been released. 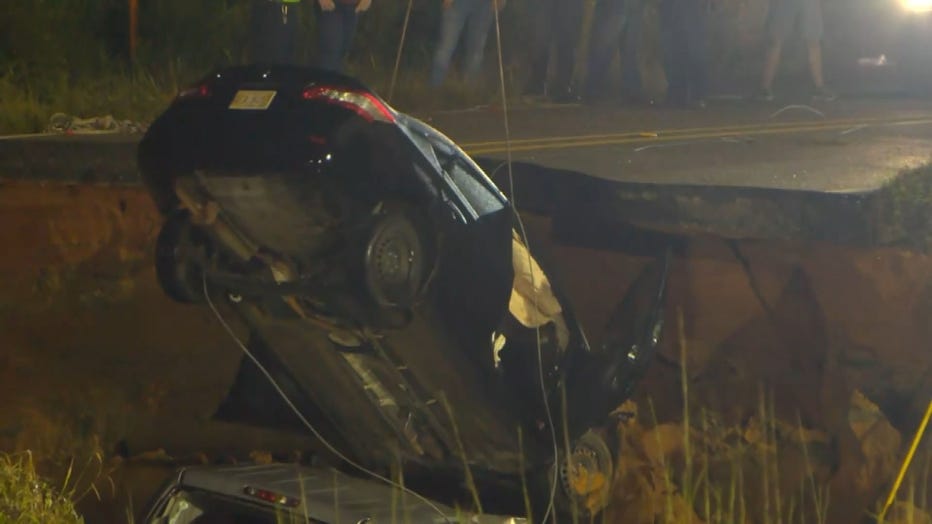 A screengrab from video shows a vehicle being lifted out of a collapsed area of Highway 28 in George County, Mississippi, on Aug. 31, 2021. (Credit: News Nation)

Robertson said he believes the torrential amount of rain in the area following Hurricane Ida may have caused the roadway to collapse, adding that drivers may not have seen the roadway in front of them was impassable.

Hurricane Ida, a Category 4 storm, blasted ashore Sunday as one of the most powerful storms ever to hit the U.S., knocking out power to all of New Orleans, blowing roofs off buildings and reversing the flow of the Mississippi River.

Rescuers in boats, helicopters and high-water trucks brought hundreds of people trapped by floodwaters to safety Monday, and they planned to eventually go door to door in hard-hit areas to make sure everyone got out.

Ida’s 150-mph winds tied it for the fifth-strongest hurricane to ever hit the mainland U.S.