A Methodist church in Claremont has unveiled a nativity scene depicting Jesus, Mary and Joseph as refugees in cages separated at the border.

CLAREMONT, Calif. - A photo of a display taken outside Claremont United Methodist Church which shows the Holy Family of Jesus, Mary, and Joseph separated at the border is going viral.

It's a nativity scene with a contemporary message- set up outside the Claremont United Methodist Church. It shows Mary, Joseph and baby Jesus separated by border fences. Leah Uko is live at the church where people are weighing in on the controversial images.

The display shows each Holy Family member confined inside chain-link fencing with razor wire on top. 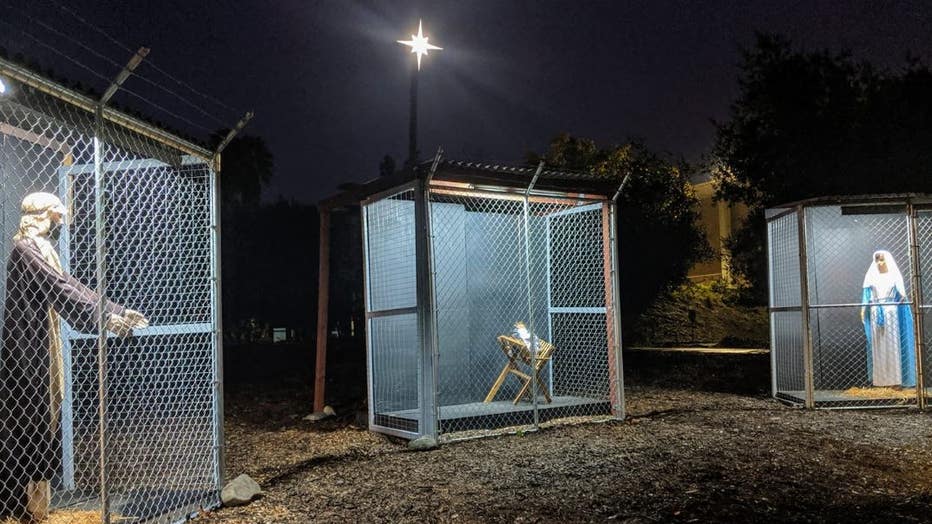 The image was posted to Karen Clark Ristine’s Facebook page on Saturday with a lengthy caption.

Ristine is a senior minister at the church.

In the post, Ristine said she was "stirred to tears."

"Stirred to tears by the Claremont UMC nativity. Inside the church, the Holy Family is reunited.

The theological statement posted with the nativity: In a time in our country when refugee families seek asylum at our borders and are unwillingly separated from one another, we consider the most well-known refugee family in the world. Jesus, Mary, and Joseph, the Holy Family. Shortly after the birth of Jesus, Joseph and Mary were forced to flee with their young son from Nazareth to Egypt to escape King Herod, a tyrant. They feared persecution and death.

What if this family sought refuge in our country today?

Imagine Joseph and Mary separated at the border and Jesus no older than two taken from his mother and placed behind the fences of a Border Patrol detention center as more than 5,500 children have been the past three years.

Jesus grew up to teach us kindness and mercy and a radical welcome of all people.

He said: “I was hungry and you gave me food, I was thirsty and you gave me something to drink, I was a stranger and you welcomed me.” Matthew 25:35
In the Claremont United Methodist Church nativity scene this Christmas, the Holy Family takes the place of the thousands of nameless families separated at our borders.

Inside the church, you will see this same family reunited, the Holy Family together, in a nativity that joins the angels in singing “Glory to God in the highest and on earth peace and good will to all.” Luke 2:14."

RELATED: US held record number of migrant children in custody in 2019