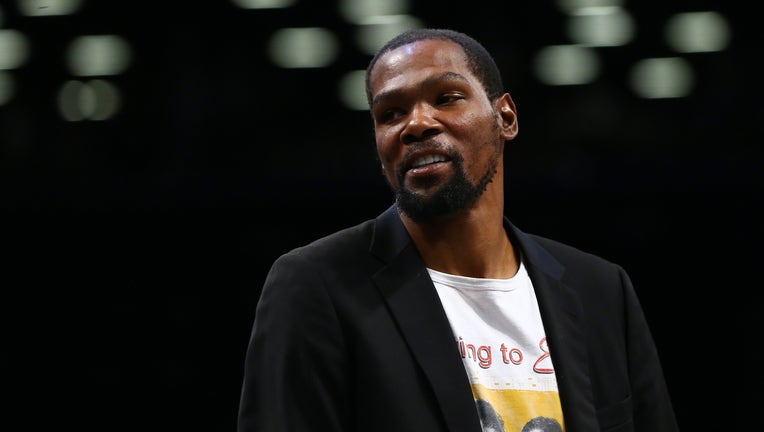 NEW YORK, NEW YORK - FEBRUARY 03: Kevin Durant #7 of the Brooklyn Nets looks on from the bench during the game Phoenix Suns at Barclays Center on February 03, 2020 in New York City.Brooklyn Nets defeated the Phoenix Suns 119-97. NOTE TO USER: User ex

Durant, a 10-time NBA All-Star, has a 5% ownership stake, with an option for 5% more in the near future, the Union announced Monday.

“I’ve always been a soccer fan and have wanted to get into it in a meaningful way. My team and I felt an instant connection with the Philadelphia Union ownership and staff and their vision for a partnership," Durant said in a statement. "While you won’t get to see me at games for now, my team and I will be taking an active role in the community where I can help give back to Chester (Pennsylvania) and Philadelphia.”

The Union and Durant's Thirty Five Ventures, a firm he runs with sports executive Rich Kleiman, will partner to grow the team's profile and community outreach through the Kevin Durant Charity Foundation.

Thirty Five Ventures and the Union aim to develop community programs in Chester, Pennsylvania, home of the Union's Subaru Park, to address racial and social injustice as well as recovery efforts from the coronavirus pandemic.

“This partnership was months in the making and in the process, our teams got to know each other very well and understand the true potential for the future,” Kleiman said. "We believe that Thirty Five Ventures and our expertise will attract new fans in Philly and beyond, so we’re excited to get started.”

Major League Soccer's season has been on hold since March 12 because of the pandemic. The 26-team league is set to restart next month with a World Cup-style tournament at ESPN's Wide World of Sports complex at Walt Disney World in Florida.

The NBA also is planning an August restart, with playoffs held at Disney World.