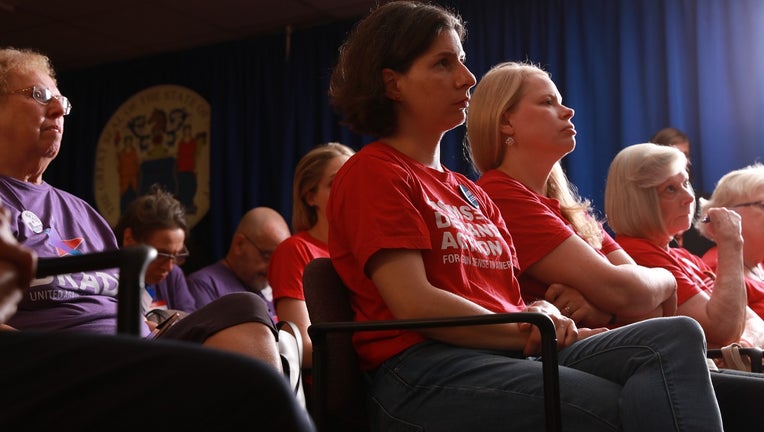 The new laws add to New Jersey's growing list of at least 10 gun-related laws enacted in the last year and come after weekend firearm attacks in Texas and Ohio left 31 dead. But the new legislation's co-author, Democratic Assembly Majority Leader Louis Greenwald, said the timing of the enactments is purely a "tragic" coincidence.

Lt. Gov. Sheila Oliver signed the measures Monday at the governor's office while Democratic Gov. Phil Murphy is out of the state on vacation.

Oliver signed the bills alongside lawmakers, the state's attorney general, health commissioner and state police superintendent. In the audience were a number of red T-shirt-clad Moms Demand Action members, who have become a common sight at bill-signings in New Jersey.

At several points, Oliver and some of the other speakers became emotional talking about gun violence, which several speakers described as a public health crisis.

"We're not accepting gun violence in our communities with a shrug and a sigh of oh well. We're taking it on with every fiber of our being," Oliver said.

One measure requires the Health Department to establish a hospital-based violence intervention plan to lower the risk of re-injury or retaliatory violence.

Greenwald said in an interview that lawmakers looked at similar programs in Baltimore and at the state level in Massachusetts. He says lawmakers reviewed studies that showed victims of gun violence face greater risks of becoming victims again or seeking out retaliation.

Acting Health Commissioner Judy Persichilli said the state operates a similar program at University Hospital in Newark and that there are about 25 similar programs across the country.

New Jersey under Murphy has enacted a number of new firearms laws. In July, he signed a bill to make so-called smart guns that can be fired only by authorized users available in the state. In June 2018, he signed a half-dozen gun control measures , including a bill to cap magazine capacity at 10 rounds, down from 15.

In a statement over the weekend Murphy called on Congress and the president to pursue gun control legislation.

"Over the past 18 months, we have taken tremendous strides to end the crisis of gun violence in our state, but we cannot have these advances undone by continued inaction and deflection at the national level," Murphy said.

This story has been corrected to show that Murphy signed a bill to make smart guns available in July, not June, and that he signed a half-dozen gun-related measures in June 2018, not July.