Michael's classmates waved cut-out hearts to show support for their friend on his big day.

GRAND RAPIDS, Mich. - A 5-year-old boy in Michigan was so excited to be adopted into his forever family, he invited his entire kindergarten class to witness the hearing.

On Thursday, Michael Clark Jr. was one of 36 finalized adoptions as part of Kent County’s 23rd annual Adoption Day, according WZZM-TV. His pint-sized guests from Wealthy Elementary in Grand Rapids waved cut-out hearts on sticks to show support for their classmate.

"We began the school year as a family," Clark's teacher told the station. "Family doesn't have to be DNA, because family is support and love." 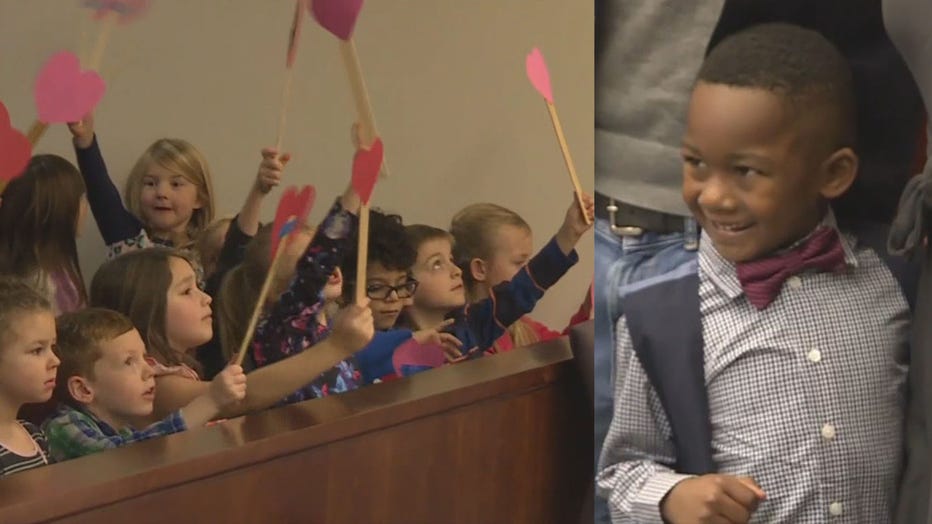 Michael (R) is pictured on his adoption day, alongside his entire kindergarten class who attended the hearing to help him celebrate. (Photo credit: WZZM-TV)

Each of the boy’s classmates introduced themselves and told the judge why they were there — with many expressing their love for Clark, WZZM reported.

"Michael is my best friend," one classmate said.

A photo of Michael's adoption day posted by Kent County on Facebook has been shared more than 110,000 times.

“There is not a dry eye in Judge Patricia Gardner’s courtroom,” the county shared in another post about the special day.

Clark was lovingly adopted by Dave Eaton and Andrea Melvin, who first became his foster parents about a year ago, according to WOOD-TV.