Eric Adams has said what we all know, New York City is fighting COVID, crime and economic devastation, all at the same time. Now, he has the job of fixing it.

NEW YORK - Mayor-elect Eric Adams promised Wednesday to be a practical and progressive mayor who will make the nation's largest city safer and more business-friendly.

Adams, the 61-year-old current Brooklyn borough president, defeated Republican challenger Curtis Sliwa, the founder of the Guardian Angels and a radio talk show host. He will succeed Bill de Blasio, who is term-limited, as the leader of the country's largest city.

The next leader of the nation's largest city talks about his victory over Curtis Sliwa, the post-victory celebrations, and the future of NYC.

Adams will be New York City's second Black mayor. He will take office on Jan. 1 in a city where more than 34,500 people have been killed by COVID-19, and where the economy is still beset by challenges related to the pandemic. The tourism industry hasn’t come back yet. Office buildings remain partly empty, with people still working from home. Schools are trying to get children back on track after a year of distance learning.

"I'm going to be a GSD mayor- get stuff done. We have to get it done. If you don't get it done if you are in the place that's called the Empire State yet you are destroying empires every day. We're not friendly. People are afraid to do business in the city, too bureaucratic, too expensive and too difficult. My agency heads are going to get a new mandate; instead of walking into a business figure out how to close it down,  we are going to figure out how to keep it open." 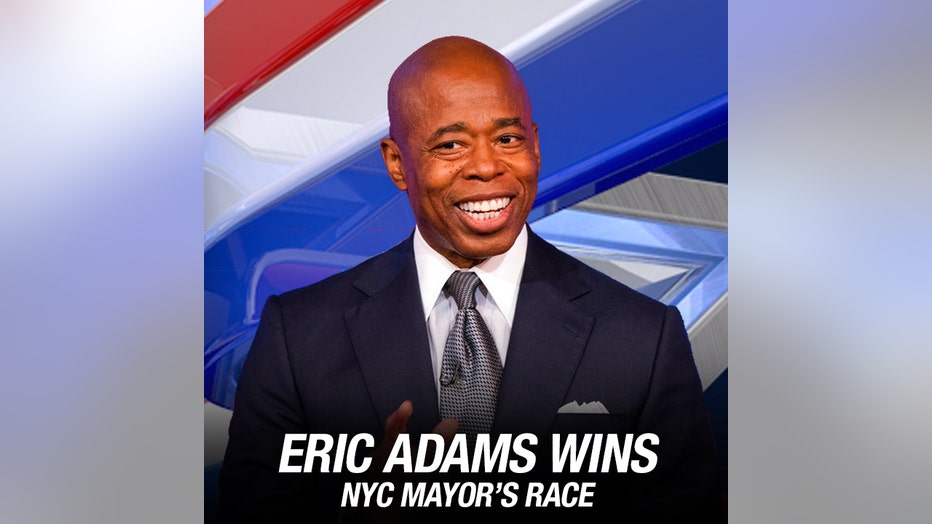 On Election Day, Adams carried a photo of his late mother, to the voting booth in Brooklyn. He teared up as he portrayed his life as a New York story, taking him from a poor childhood to City Hall.

When Adams takes office he'll inheri a city where more than 34,500 people have been killed by COVID-19, and where the economy is still beset by challenges related to the pandemic. The tourism industry hasn’t come back yet. Office buildings remain partly empty, with people still working from home. Schools are trying to get children back on track after a year of distance learning.

"Tonight, New York has chosen one of you -- one of our own. I am you. I am you," Adams told supporters at his victory party. "After years of praying and hoping and struggling and working, we are headed to City Hall."

Adams won a crowded and close Democratic primary by running as a moderate and promising to focus on public safety. His 22-year career as a police officer bolstered his law-and-order credentials. Soon after he retired from the NYPD as a captain, he was elected to the state Senate.

Eric Adams celebrated his victory in the New York City mayoral race with stops at various parties. It was a different vibe in New Jersey where incumbent Gov. Phil Murphy leads challenger Jack Ciattarelli by one percentage point.

Adams was heavily favored over Sliwa in part because registered Democrats outnumber registered Republicans in New York City about seven to one.

He has promised to address inefficiency in government and inequality in the city at large.