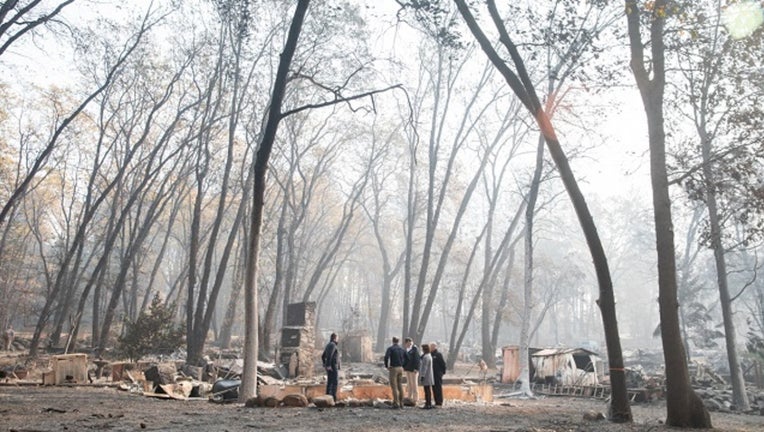 As California fire investigators officially concluded that the deadliest U.S. wildfire in a century was caused by Pacific Gas & Electric Corp. power lines, lawmakers expressed deep skepticism about whether the utility had made the dramatic changes needed to prevent another deadly blaze.

The company's new chief executive, Bill Johnson, made his first appearance before lawmakers Wednesday, who peppered him with questions on his plan to lead the troubled utility.

"We shouldn't have to be reliving this," said Democratic Assemblywoman Eloise Reyes. "We need to know what the lessons learned are."

State fire officials said transmission lines owned and operated by the San Francisco-based utility started the Nov. 8 fire that killed 85 people and wiped out nearly 15,000 homes in the town of Paradise. Many of those killed were elderly or had disabilities; the oldest was 99.

"Investigators determined there were violations of law," Cal Fire deputy director Mike Mohler said relating to Wednesday's report, but he said he hadn't read the report and didn't know the nature of the violations.

Cal Fire did not release its full investigative report, saying it had been forwarded to the Butte County district attorney's office, which is considering criminal charges against the utility.

Johnson said he expected when he began the job two weeks ago that PG&E would be found responsible for sparking the wildfire, noting the utility had said it was probable in recent filings.

"It's a disappointment that this happened," he said. "Let's not do it again."

He takes the helm both as California prepares for another wildfire season and as PG&E is in the midst of Chapter 11 bankruptcy proceedings. The utility filed in January as it faced potentially tens of billions of dollars in liability from wildfires. California law makes utilities financially liable for damages from wildfires sparked by its equipment, and PG&E is already facing lawsuits from insurance companies and wildfire victims from the Paradise fire.

State fire officials have determined that PG&E caused 18 fires in 2017, and they referred 12 for possible criminal prosecution.

In preparation for the upcoming fire season, Johnson said the utility has begun inspecting every one of its power and transmission lines, a process that could cost $600 to $900 million including repairs. It's also proposed a dramatic expansion of planned electrical outages.

The findings Wednesday bring "even greater urgency to our need to inspect, repair, have a power safety shut off plan," Johnson told reporters after the legislative hearing.

He said he hopes to redeem PG&E in the eyes of lawmakers and customers but understands the process won't be easy.

"There's nothing we can say that matters one bit unless we live up to our words and our commitments," he said. "You cannot restore trust without results; you cannot restore relationships with rhetoric."

Democratic Assemblyman Jim Wood offered personal insight into the grim reality of wildfires caused by PG&E and other utilities. Wood, a forensic dentist from Santa Rosa, helped identify bodies in the fire that ripped through his hometown in 2017 as well as the Paradise wildfire and the 2010 deadly explosion of a PG&E natural gas pipeline.

"I'm tired of identifying victims - and all of those have a link to a utility," he said.

Butte County District Attorney Mike Ramsey said in a statement that he is still weighing possible criminal charges against the utility, a decision that could take months. He called Cal Fire's decision to forward its report to Butte County "strictly symbolic" because it has been long known that PG&E's equipment caused the fire.

Shares of PG&E fell less than 1% before the opening bell Thursday.

Attorney Mike Danko, who represents 2,000 victims of the fire, said he was encouraged by the fact that Cal Fire sent its latest report to the district attorney, which could mean it has evidence that the utility was negligent on safety issues.

"We know from our work that PG&E knew its towers in the area were corroded and were at risk of failing," Danko said.

Paradise Mayor Jody Jones said she was not surprised to hear Pacific Gas & Electric power lines sparked the blaze that decimated her town and she hopes the findings help the city's legal case against the utility.

"It's nice to have a definite answer," Jones said.