President Donald Trump wrapped up his term at the White House with a farewell video on his final day in office Tuesday.

WASHINGTON - On his final day as U.S. secretary of state, Mike Pompeo tweeted denouncing "multiculturalism" and "woke-ism" in America.

"Woke-ism, multiculturalism, all the -isms — they're not who America is," Pompeo tweeted on Tuesday. "They distort our glorious founding and what this country is all about. Our enemies stoke these divisions because they know they make us weaker."

Pompeo’s tweet was accompanied by an image of himself overlaid by a self-attributed quote that read, "Censorship, wokeness, political correctness, it all points in one direction — authoritarianism, cloaked as moral righteousness."

Many users spoke out against Pompeo’s tweet, including actor Elijah Wood, who wrote, "multiculturalism isn’t who we are? this country was born... on the backs of immigrants who shaped and defined this country."

Pompeo’s denigration of multiculturalism came as Vice President-elect Kamala Harris was about to become the United States’ first Black woman and person of South Asian descent to ever hold the office of vice president. Harris has celebrated her multicultural heritage, long incorporating both sides of her parentage in her public persona.

She has also been steadfast in claiming her Black identity, saying her mother -- the biggest influence on her life -- raised her and her sister as Black because that’s the way the world would view them.

"My mother instilled in my sister, Maya, and me the values that would chart the course of our lives," Harris said in a speech at the Democratic National Convention to accept her party’s nomination. "She raised us to be proud, strong Black women. And she raised us to know and be proud of our Indian heritage."

President-elect Joe Biden vowed the most diverse administration in history, and his Cabinet nominees represent that promise. Biden noted that his will be the "first Cabinet ever" to reach gender parity and include a majority of people of color.

Some prominent picks include Pennsylvania Health Secretary Rachel Levine, who Biden tapped to be his assistant secretary of health, leaving her poised to become the first openly transgender federal official to be confirmed by the U.S. Senate.

New Mexico Rep. Deb Haaland was nominated as interior secretary, making her the first Native American to lead the powerful federal agency that has wielded influence over the nation's tribes for generations. 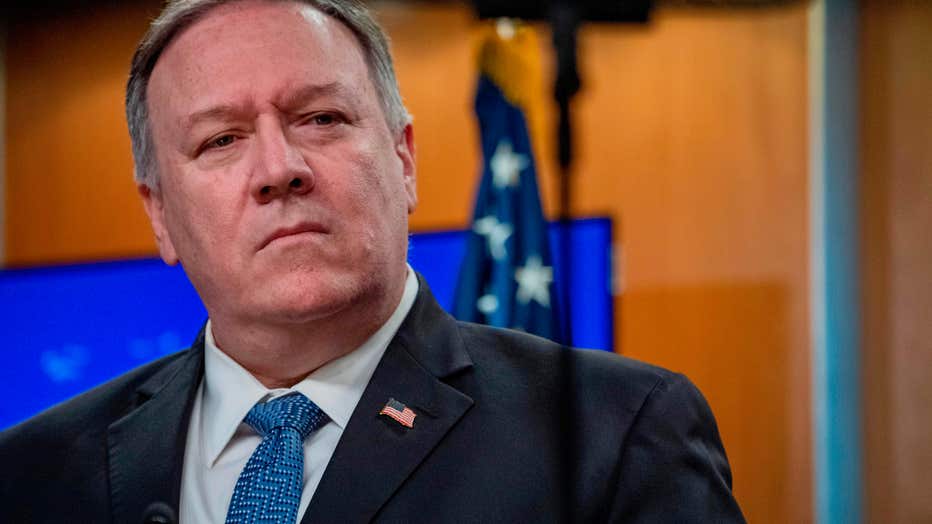 US Secretary of State Mike Pompeo delivers remarks to the media, in the Press Briefing Room, at the Department of State in March 5, 2020 in Washington,DC.

Biden nominated retired four-star Army general Lloyd J. Austin to be secretary of defense making him the first Black leader of the Pentagon.

And Biden’s foreign policy team was beginning to take shape after he nominated Linda Thomas-Greenfield as the U.S. ambassador to the United Nations.

While she won’t be the first African American to serve as America’s U.N. envoy — Andrew Young, who held the job during President Jimmy Carter’s administration, holds that distinction — Thomas-Greenfield’s selection is a signal to Biden supporters that his diversity message and plan to elevate career diplomats is not just lip service.

Over the past week, Pompeo, who has been a fierce advocate for Trump’s "America First" doctrine, has celebrated controversial policies that are likely to be overturned by his successor.

He stepped up criticism of what he billed as unfair news coverage, complained about alleged censorship of conservatives on social media and urged followers of his official State Department Twitter account to start following his personal one.

Pompeo posted a tweet last week promoting Trump for the Nobel Peace Prize while the House was debating Trump’s role in encouraging the Jan. 6 Capitol insurrection.

While it’s not unusual for outgoing Cabinet members to publicize their successes, Pompeo has taken it a step further by trashing his predecessors in the national security community, some of whom will play prominent roles in Biden's administration.

"Remember this Middle East ‘expert?’ He said it couldn’t happen. We did it," Pompeo said in a taunting tweet featuring a video clip of John Kerry saying Arab countries would not recognize Israel without an Israeli-Palestinian peace deal. Kerry, a former secretary of state, will serve as climate envoy in the Biden administration.

Pompeo has also been openly critical of the 2020 presidential election results, telling (https://www.ktvu.com/news/pompeo-says-there-will-be-smooth-transition-to-a-second-trump-administration-despite-projected-biden-win) reporters in November that there would be "a smooth transition to a second Trump administration," despite President-elect Biden’s projected win at the time. His remarks came amid Trump’s refusal to concede in the election, raising false claims of widespread voter fraud.

"There will be a smooth transition to a second Trump administration," Pompeo said. Breaking into a smile, he added: "Right. We're ready. The world is watching what's taking place here."

"We're going to count all the votes. When the process is complete, there'll be electors selected. There's a process. The Constitution lays it out pretty clearly," Pompeo said.

The Associated Press and Chris Williams contributed to this story.