The family, friends, and colleagues of Trooper Branden Sisca gathered in Collegeville, Pennsylvania to pay their respects to the trooper who was killed in the line of duty after being struck by a suspected drunk driver.

COLLEGEVILLE, Pa. - A funeral was held for a Pennsylvania state trooper on Saturday after he and another trooper were killed by a suspected drunk driver as they assisted a man on I-95 in Philadelphia last week.

The funeral for Trooper Branden Sisca was held at Perkiomen Valley High School in Collegeville, Pennsylvania on Saturday morning following a procession from the funeral home to the high school.

Sisca, 29, and Trooper Martin F. Mack III, 33, were on the highway responding to a call for a man walking in the southbound lanes of the roadway when police say all three were struck and killed by a suspected drunk driver.

Authorities say Jayana Tanae Webb, 21, was behind the wheel of the SUV when it plowed into the men, sending all three over the median and into the northbound lanes. Her vehicle later came to a stop in the right shoulder and she was taken into custody.

Webb faces more than a dozen charges in the incident, including three counts of third-degree murder, three counts of homicide by vehicle while driving under the influence, and two counts of second-degree manslaughter of a law enforcement officer. Sources have told FOX 29 since the crash that Webb had a blood alcohol level twice the legal limit when she was tested following the crash. 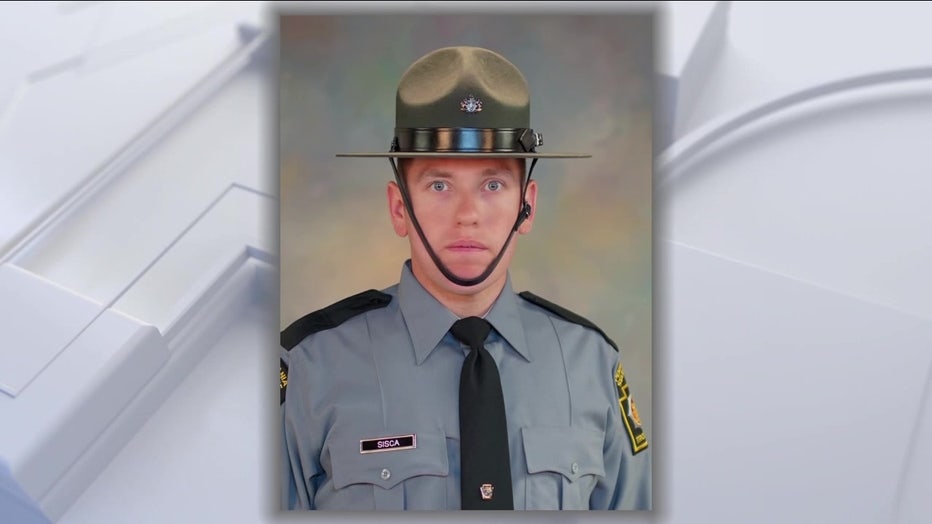 Law enforcement sources also say that Mack and Sisca had conducted a traffic stop involving Webb's SUV a short time before the crash, but that stop was cut short as they responded to priority calls for the man walking on the highway. The initial stop lasted less than a minute, according to sources.

Sisca, who had a dedicated career in public service, was also the fire chief of the Trappe Fire Company in Montgomery County, where he volunteered for more than a decade.

"Our community is grieving at the loss of our brother," Deputy Fire Chief John Bolger said when he learned of Sisca's death. "It's a very close community here that we're all part of this, and we're all grieving today."

Sisca was a husband and a father-to-be.

"He was born and raised to help others he was doing his job it’s such a sad, sad day," Steve Carcarey, a family friend, said.

Both Sisca and Mack were organ donors, and donated organs to the Gift of Life Program, according to a release from the Pennsylvania State Troopers Association.

Mack was laid to rest on Thursday at St. Michael the Archangel Church in Levittown.