Trooper Branden Sisca was remembered Friday during two public viewings in Norristown. Sisca, Trooper Martin Mack, and a third man were killed last week when they were struck by a suspected drunk driver on I-95 in Philadelphia.

PHILADELPHIA - Two public viewings were held Friday for Trooper Branden T. Sisca, one of two troopers killed by a suspected drunk driver on I-95 last week.

Morning and night viewings were held for Sisca at the Boyd-Horrrox-Givnish Funeral Home in East Norristown. A large number of emergency responders from across the country came to pay their respects.

Authorities say Sisca, 29, and Trooper Martin Mack III, 33, were assisting a man who was walking in the southbound lanes of I-95 early on the morning of March 21. The troopers were walking that man, later identified as Reyes Rivera Oliveras, back to their patrol vehicle when authorities say all three were struck by an SUV.

Jayana Tanae Webb, 21, was allegedly behind the wheel of the SUV when it plowed into the men, sending all three into the northbound lanes. Sisca, Mack, and Oliveras were later pronounced dead at the scene. 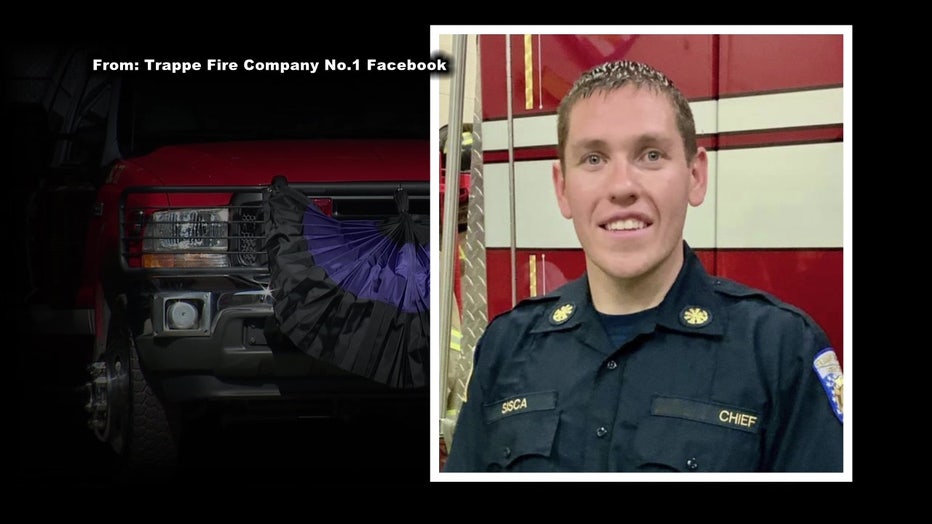 Webb faces more than a dozen charges in the incident, including three counts of third-degree murder and driving under the influence.

Trooper Mack, a husband and father of two, was laid to rest during a funeral service on Thursday.

Law enforcement sources also say that Mack and Sisca had conducted a traffic stop involving Webb's SUV a short time before the crash, but that stop was cut short as they responded to priority calls for the man walking on the highway. The initial stop lasted less than a minute, according to sources.

Sisca started his career as a state trooper last year and was recently named fire chief of the Trappe Fire Company in Montgomery County, where he had volunteered for more than a decade. He was recently married and a father-to-be.

"It’s our worst nightmare, especially as commanders in the state police you're responsible for each of your men and women that work for you, and when you lose one like this it’s just devastating to everyone involved," Retired Pennsylvania State Trooper Joseph Altieri said.

A funeral for Trooper Martin F. Mack III was held at St. Michael the Archangel Church in Levittown Thursday morning. Following the service a procession transported him to his final resting place at Our Lady of Grace Cemetery in Langhorne.  "I will remember my hero as an amazing father, best friend, and my filter, my sounding board and my husband." Stephanie Mack said. "The girls were incredibly lucky to have you even if that time was cut incredibly too short."

"I’ve spoken to troopers from all the way out west to the middle of the country to the northeast and then huge municipal departments Minneapolis PD have personnel here, NYPD has personnel here," Corporal Miller said.

Trooper Sisca grew up in Norristown and graduated from Perkiomen Valley High School, where loved ones will gather for his funeral on Saturday.