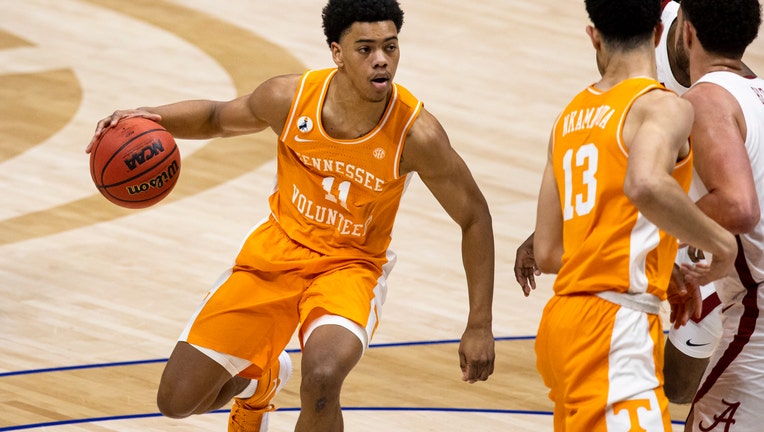 NASHVILLE, TN - MARCH 13: Jaden Springer #11 of the Tennessee Volunteers drives to the basket against the Alabama Crimson Tide during the first half of their semifinal game in the SEC Men's Basketball Tournament at Bridgestone Arena on March 13, 2021

PHILADELPHIA - Trying to rebound after a crushing end to their season, the Philadelphia 76ers selected Tennessee freshman Jaden Springer with the 28th pick of the NBA draft on Thursday night.

The 6-foot-3 guard, who turns 19 in September, averaged 12.5 points in 25 games in his lone season with Tennessee and led the team in free throws made. He'll be a 3-and-D option off the bench, one area of need for the Sixers. He was an All-Freshman selection in the Southeastern Conference.

"It’s a position where you can see a path to potentially getting on the floor," 76ers President Daryl Morey said. "It usually takes a rookie more than a year, but you never know."

He was the first Vol to go one-and-done since new 76ers teammate Tobias Harris in 2011. Keon Johnson also left after one season and was drafted Thursday by the New York Knicks.

Springer offers a bigger frame and could see work at the point in the NBA with his ability to get loose in the open floor and connect with teammates (2.9 assists per game). Springer shot 43.5% from 3-point range, but attempted just 1.8 per game, so it wasn’t a primary weapon for him.

The 76ers left the draft — and perhaps well beyond — with maligned All-Star guard Ben Simmons still on the roster. Simmons, the No. 1 pick of the 2016 draft, has floated in trade proposals ever since the Sixers were eliminated by the Atlanta Hawks in the second round of the Eastern Conference playoffs. The three-time All-Star is headed into the second year of a $177 million max deal, but his failures from the free-throw and 3-point lines have made him expendable.

Simmons seemed nonplussed by the trade speculation, posting videos on Instagram of him relaxing in a pool. The Sixers are in no rush to trade Simmons and could wait until the trade deadline — or just keep him — and see if can he can bolster his value by showing some improvement with his jumper and from the line.

Morey declined to address Simmons specifically, only saying the Sixers were pleased with having Joel Embiid, Simmons and Harris in their prime "with a long runway in our mind."

Morey also said Embiid was in the gym Thursday afternoon and there was no concern over the NBA MVP runner-up's health after he played in the postseason with a torn meniscus in his right knee.

The Sixers selected former Gonzaga standout and West Coast Conference Player of the Year Filip Petrusev with the 50th pick of the draft. Petrusev left Gonzaga before last year to play professionally in Serbia. The 21-year-old big man was the MVP of the Adriatic League. The Sixers could keep him overseas.

With the 53rd pick, the Sixers selected Western Kentucky center Charles Bassey. Bassey averaged 17.6 points and 11.6 rebounds with the Hilltoppers and could slide into the role as Embiid's backup. Bassey was one of the nation’s best shot blockers (fourth at 3.1 per game) and rebounders (fifth at 11.6). That could make him a frontcourt asset for the Sixers, who relied on veteran Dwight Howard as the big off the bench last season.

The Sixers went 49-23 and earned the top seed in the East. They lost three games at home to the Hawks in the East semis.

"I view the draft as the really important blocking and tackling you do if you plan to have a consistent winner like we do in Philly," Morey said.