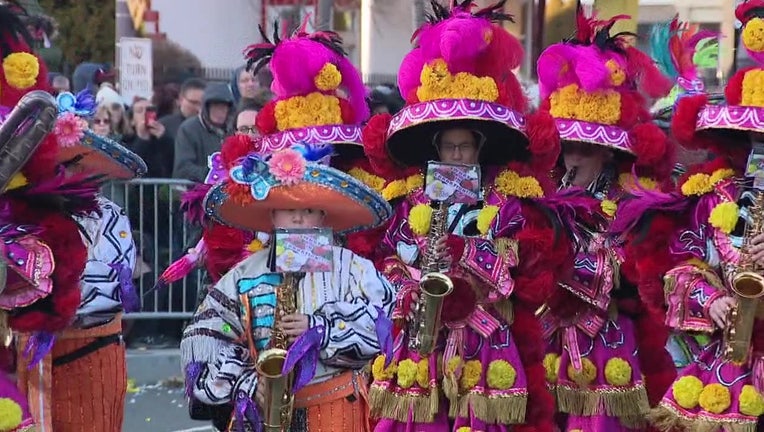 PHILADELPHIA - The Mummers' strut has been stopped in its tracks.

Philadelphia's famed, and often inflammatory, New Year's Day parade was canceled by the city on Tuesday — along with every other large event on public property through February 2021 — as officials try to keep a lid on the coronavirus pandemic.

The Mummers Parade had been called off only twice before in its 119-year history, the last time in 1934 during the Great Depression. The parade is a colorful celebration that features string bands, comic brigades, elaborate floats and plenty of feathers and sequins, but it has also attracted persistent criticism over its long history of racist blackface displays and other inappropriate or offensive behavior by some participants. After this year's parade, Mayor Jim Kenney threatened to end it if parade organizers didn't clean up their act.

The city's extended moratorium on large events also applies to festivals, parades, concerts and fairs, including the Thanksgiving Day Parade and the Broad Street Run.

“I know this news will be disappointing for many Philadelphians,” Kenney said at a virtual news conference. “It was not an easy decision to make, but as we continue to battle COVID-19 and try to restore some sense of normalcy in our city, we know there will be many difficult decisions to come.”

Kenney stressed the city's ban does not apply to protests and demonstrations, nor to large-scale events on private property including stadiums and arenas, which must abide by existing pandemic restrictions from the state Health Department.

The Philadelphia health commissioner, Dr. Thomas Farley, said the decision to cancel large, public events until 2021 was tied to when a vaccine might be available.

Farley also referenced the city's infamous decision to hold a parade at the close of World War I, in the midst of an influenza pandemic. Thousands of people caught the flu and died.

"I think the failure to not cancel that parade way back in 1918 still weighs on the minds of many public health officials,” Farley said.

Rivers Casino Philadelphia, meanwhile, announced Tuesday that it plans to reopen Friday after a four-month shutdown, though with limited hours and no indoor dining. The casino said that masks must be worn at all times — “no exceptions, no pulling down” — and that security will enforce compliance.