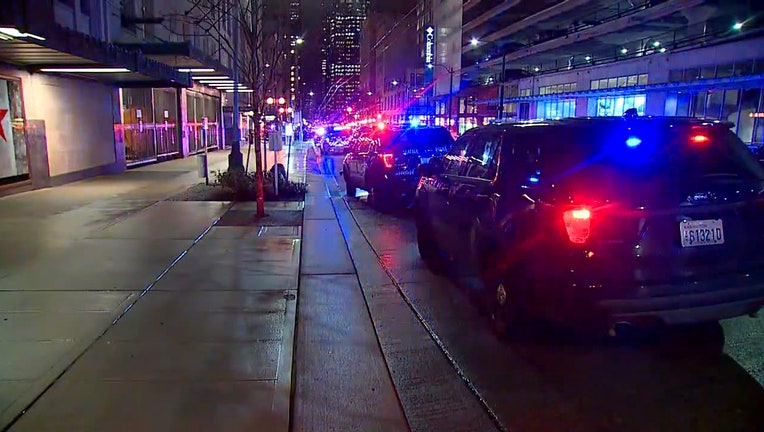 Seattle Fire Chief Harold Scoggins said authorities began receiving calls at about 5 p.m. Wednesday of multiple gunshot victims. One person was found dead in a heavily trafficked area of downtown and five others were taken to a Seattle hospital, he said.

The Seattle Times reported later Wednesday evening that police said seven people were being treated at a hospital for gunshot wounds.

Susan Gregg, a spokeswoman at Harborview Medical Center, said a woman was in critical condition, a man was in serious condition and five other men were in satisfactory condition with gunshot wounds to the legs, chest, buttocks and abdomen.

Police Chief Carmen Best said what they believe is a lone suspect fled and police are searching for him. Multiple police units, including homicide and gang units, are at the scene, she said.

Tyler Parsons was working the register inside Victrola Coffee Shop nearby when the shooting occurred, the Seattle Times reported. He heard no shots -- they play music loud in the store, Parsons said -- but customers started dropping to the ground.

People were running behind the register, taking cover. He hustled five or six customers inside a back storage area, along with a coworker.

He waited a couple of minutes before walking back out. Parsons went into the building lobby and saw two victims: one outside, lying in front of the building, visibly injured but alive and moving. The second was inside the lobby, up against the security desk, with an apparent gunshot wound to the leg. He muttered, "I think I got shot, I think I got shot," Parsons said.

Samantha Cook, 40, of Edmonds, said she was refilling her transit card in Westlake Station when she heard the shots.

"I was on the first set of escalators," Cook said. "There were a lot of gunshots that started going off -- maybe 10 or 11. It was just rapid fire."

The scene was chaotic, she said.

It's the third downtown Seattle shooting in two days. Police found a man with a gunshot wound in a mall stairwell Tuesday afternoon, who later died at a hospital. Police shot a person in another area of downtown Seattle earlier on Wednesday.