A police officer found the pig wandering the streets in Chester County, Pa.

CHESTER COUNTY, Pa - Police and the Brandywine Valley SPCA are hoping to reunite a lost pig with its rightful owner after he was found wandering the streets in Chester County. 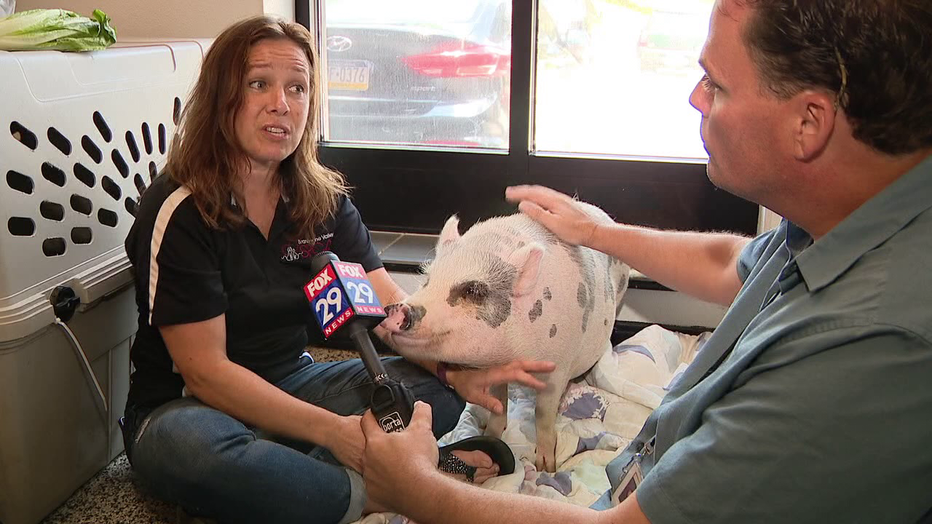 On Wednesday, Easttown police officers Kevin Lowe and Brian Boyd were given the thankless task of catching the runaway pig and it was no cakewalk. Officer Price wrangled the pig up, but it took him for a good ride for about 45 minutes.

"Well, I can tell he’s been handled before. He’s not scared of people and he’s definitely been around people," Julie Landy, of the Brandywine Valley SPCA, told FOX 29.

He’s also been neutered all of which seems to indicate the pig is somebody’s pet. They don’t get many stray pigs at the shelter.

"Pigs are very smart and they’re really resourceful, so if they want to get out of the yard or something they can. My pig itself, he can pick up a fence if he wants to," Landy said.

This one loves his veggies —especially cherry tomatoes— and he’s social.  Linda Torrelli believes the pig is someone’s stray pet so she wants to get the word out.

"There’s a family who’s probably missing this pig, so help get the word out and that goes for whenever you see a stray dog or cat,' she said.