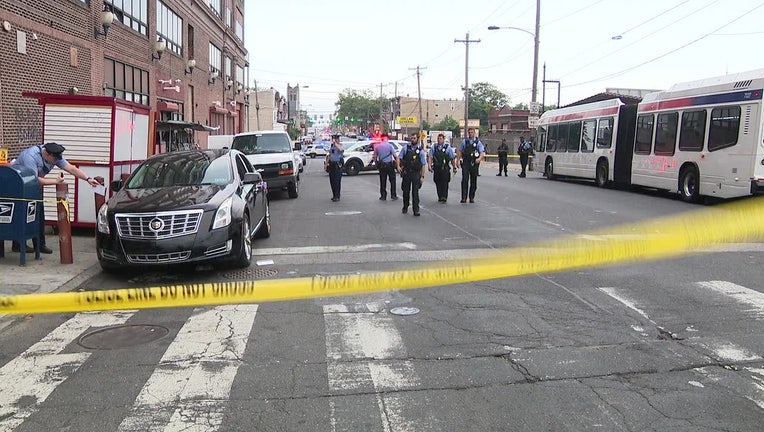 Police investigate after a double shooting on West Lehigh Avenue kills one man and critically injures a second man. A SEPTA bus was also struck by gunfire, but no passengers on the bus were harmed.

NORTH PHILADELPHIA - A man is dead and a second man is recovering after they were shot in North Philadelphia.

According to officials, police responded to the 1300 block of West Lehigh Avenue, Monday, about 6:45 in the evening, on the report of a shooting.

The officers found a 46-year-old man shot multiple times, when they arrived. That man was rushed by SEPTA police to Temple University Hospital, but succumbed to his injuries and was pronounced dead. He was later identified as Steven R. Davis.

A second victim, a 44-year-old man, was shot once in the abdomen. He was taken by a private vehicle to Temple and listed in critical condition.

Authorities say a bullet hit a SEPTA bus with passengers inside, but none of the people on the bus were injured.

A preliminary investigation indicates that Davis was standing on the corner having a conversation with the 44-year-old man, who sells newspapers and other merchandise at that location.

Two unknown men, wearing face masks, began shooting in the direction of both victims, striking them. The offenders were last seen running down Lehigh Avenue towards 2700 Park Avenue.

The first suspect is described as a thin man with black or brown shoulder-length braids, wearing a black ski mask, white t-shirt and carrying a black cross-satchel.

The second suspect was a heavyset man with a black ski mask and he was also seen with a cross-satchel.