Punxsutawney Phil emerged from his burrow to perform his Groundhog Day duties. Watch as Phil's inner circle carried on the tradition at Gobbler’s Knob in Punxsutawney, Pennsylvania -- though virtually due to the coronavirus.

PUNXSUTAWNEY, Pa. - There will be six more weeks of winter Punxsutawney Phil predicted as he emerged from his burrow on a snowy Tuesday morning to perform his Groundhog Day duties.

One of the members of Phil's "inner circle" spoke before his prediction was revealed, noting that it's been a "unique year."

"People have been referencing Groundhog Day. It has felt like at times we're all living the same day over and over again," one of the members said. "Groundhog Day also shows us that the monotony ends. The cycle will be broken."

"Today actually is Groundhog Day, there's only one," he added. "There is quite literally a new day coming over the horizon."

The spectacle that is Groundhog Day at Gobbler’s Knob in Punxsutawney, Pennsylvania, still went on, but because of the coronavirus pandemic, revelers weren’t able to see him and celebrate in person: This year, it’s all virtual.

A livestream, which had more than 15,000 viewers at one point, played footage from previous Groundhog Day's ahead of the big reveal. 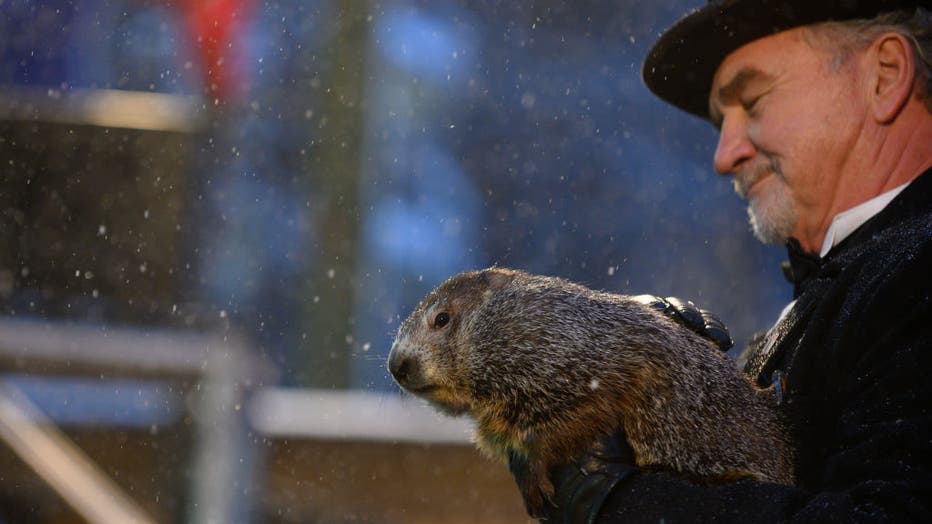 FILE - Groundhog handler John Griffiths holds Punxsutawney Phil, who did not see his shadow, predicting an early or late spring during the 134th annual Groundhog Day festivities on Feb. 2, 2020 in Punxsutawney, Pennsylvania. (Photo by Jeff Swensen/Ge

Then of course, the prognosticator of prognosticators — assisted by his Inner Circle — emerged at dawn. The lore goes that if he sees his shadow as he did this year, there will be six more weeks of winter. If he doesn't, spring comes early.

The livestream from Gobbler's Knob, a tiny hill just outside Punxsutawney about 65 miles northeast of Pittsburgh, is made possible by the Pennsylvania Tourism Office's Holi-stay PA. The event there — always Feb. 2 — dates back to 1887.

Phil this year, like many years in the past, gave his forecast during a major snowstorm that hit the entire Northeast.

The annual event has its origin in a German legend about a furry rodent. Records dating to the late 1800s show Phil has predicted longer winters more than 100 times. The 2020 forecast called for an early spring — however, Phil didn't say anything about a pandemic.

Punxsutawney Phil may be the most famous groundhog seer but he's certainly not the only one. There are two other high-profile "imposters," as the Punxsutawney Groundhog Club calls them, in the region.

Staten Island Chuck will be asked for his prophesy Tuesday around 8 a.m. at the Staten Island Zoo in New York. That event will be streamed on Facebook since the zoo is closed.

Also without fanfare, Chuckles, Connecticut's official state groundhog, will make a prediction from home: the Lutz Children's Museum in Manchester. That will also be streamed on Facebook. Chuckles X died in September, and it remains to be seen whether an anointed Chuckles XI will emerge Tuesday.