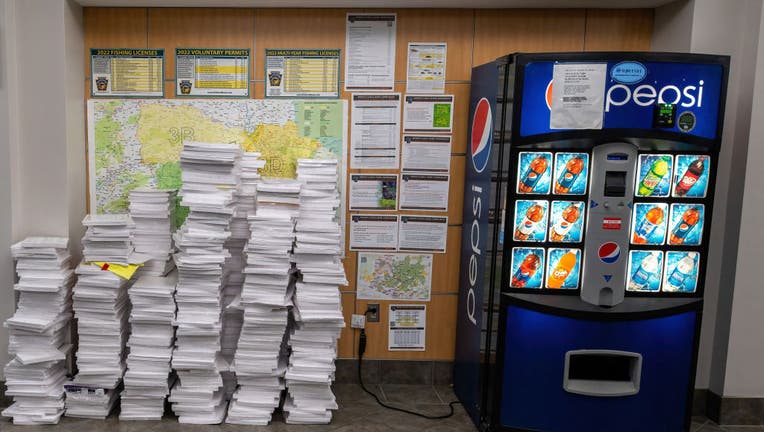 HARRISBURG, Pa. - Pennsylvania elections officials said Tuesday "a handful" of counties have not fully reported results from this month's election, at least in part because organized efforts to seek recounts are pending in court.

The Department of State declined to say how many of the state's 67 counties failed to meet the deadline for certification — the end of the day Monday.

"We continue to work with a handful of counties to obtain their full certification results," agency spokesperson Amy Gulli said in an email. "It’s a fluid situation as our team is actively receiving new information from counties all the time. When the secretary officially certifies any of the results, we will notify the media and the public via press release."

Challenges organized or supported by Republican and other conservative groups are being pursued weeks after the election without evidence emerging of problems that might change the results and after counties have completed post-election checks to verify the vote tallies are accurate.

The Department of State needs certified election results from all counties so it can compile the official results that acting Secretary of State Leigh Chapman will produce, including for the high-profile contests for governor won by Attorney General Josh Shapiro and for U.S. Senate won by Lt. Gov. John Fetterman, both Democrats.

There is no deadline for Chapman's certification, but terms in the state Legislature start next month and the results of federal elections such as U.S. Senate and House are normally sent to Congress in mid-December, the agency said.

The state election agency said Monday that counties are required to certify election returns unless there is a "legally valid and properly filed recount petition." In those cases, the Department of State said, counties are supposed to certify races that are not implicated in the recount effort.

The recounts are not being pursued because races were close enough to trigger automatic recounts or by losing candidates who would have to pay for them.

In Berks County, the local Republican Committee and 94 voters sought recounts in more than two dozen precincts last week. Clay Breece, the Berks GOP chairman, has said his group fielded reports that electronic machines were switching votes but is not claiming the election was stolen.

"As far as where those petitions are, we are still waiting for them to be assigned to a judge and a court hearing to be scheduled," Weaver said Tuesday.

Challenges in Westmoreland County held up certification in five of its 307 precincts, the Pittsburgh Tribune-Review reported, over allegations voting machines were inaccurate and claims poll workers had mishandled mail-in ballots from people attempting to vote in person.

Three voters in Blair County sought a hand count of votes from the contests for governor and U.S. Senate from a single precinct in Altoona. During a hearing on Monday, the county's lawyer argued the challengers needed to seek recounts for the entire county because those two offices were on the ballot in all of Blair's precincts.

"If they do not bring forth allegations of particularized fraud or error — meaning not just general mistake, but this is a fraud, this is the specific error — if they are not going to specify that, then every precinct is required to be opened," Blair County elections lawyer Nathan Karn said in a phone interview Tuesday. He said the deadline to seek such a countywide recount has passed.

The three voters' lawyer, Thomas Forr, said a volunteer with the Audit the Vote PA organization paid $102 in court fees, the Altoona Mirror reported. A message seeking comment was left for Forr.

Audit the Vote PA head Toni Shuppe declined comment, saying in an email that her group would not "engage with propaganda media sources." The judge in that matter has not ruled whether to dismiss the petition or order a recount.

In Luzerne County, where paper shortages caused Election Day ballot problems, the election board deadlocked Monday on whether to report official vote tallies to the state but it appears that vote will occur on Wednesday. Allegheny County’s Board of Elections voted Monday to certify their election results at 1,311 polling places but opted not to vote to certify results from 12 polling places where recount petitions had been filed.