Richmond Mayor Levar Stoney on Wednesday ordered the immediate removal of all Confederate statues in the city.

RICHMOND, Va. (AP) - Richmond Mayor Levar Stoney on Wednesday ordered the immediate removal of all Confederate statues in the city, saying he was using his emergency powers to speed up the healing process for the former capital of the Confederacy amid weeks of protests over police brutality and racial injustice.

Stoney said he was also moving quickly because protesters have already toppled several Confederate monuments and is concerned that people could be hurt trying to take down the gigantic statues.

“We have an urgent need to protect the public,” Stoney said in a statement.

Stoney's move came on the day a new state law took effect granting control of the monuments to the city. The law outlines a removal process that would take at 60 days to unfold.

But during a City Council meeting Wednesday morning, Stoney balked as the council scheduled a special meeting for Thursday to formally vote on a resolution calling for the immediate removal of the statues.

“Today, I have the ability to do this through my emergency powers,” Stoney said. “I think we need to act today.”

About an hour later, work crews were spotted near the Jackson statue.

Videos posted on Twitter showed workers being lifted in a crane to the top of the statue and attempting to attach something to it.

Interim city attorney Haskell Brown said any claim that Stoney has the authority to remove the statues without following the state process would contradict legal advice he has previously given the council and administration.

Stoney and several city councilors said they were concerned that the statues have become a public safety hazard during weeks of protests over the police killing of George Floyd in Minneapolis.

In Portsmouth, one man was seriously injured as protesters tried to pull down a Confederate statue. 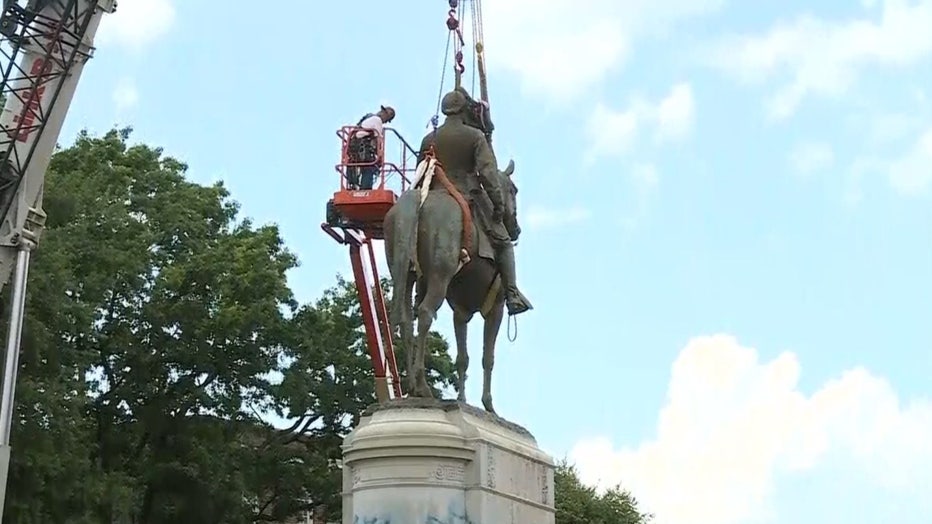