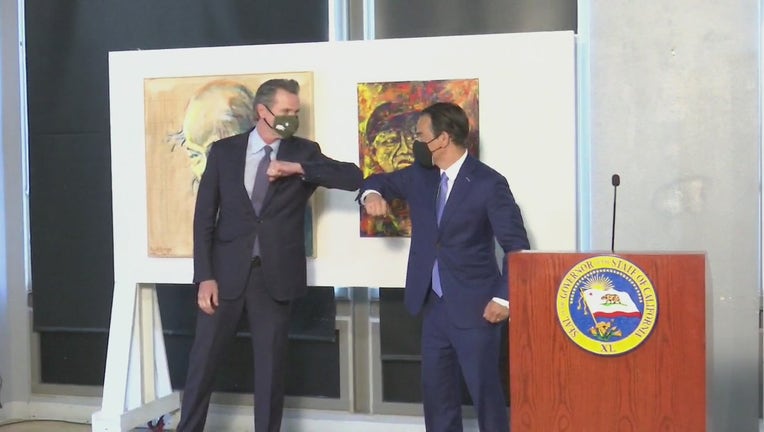 SACRAMENTO, Calif. - Rob Bonta was confirmed as California's new Attorney General on Thursday in a 29-6 vote.

"Thank you, colleagues, for your confidence and votes to confirm me as California’s next Attorney General," Bonta tweeted after he got a standing ovation. "I’m deeply honored and pledge to fight for justice for all Californians."

Rob Bonta was confirmed as California's new Attorney General on Thursday in a 29-6 vote. KTVU's Greg Lee had a chance to speak with Bonta about the honor and the work ahead.

The day before, the now-former assemblyman promised to hold police accountable for misconduct, as lawmakers offered veiled criticism of his predecessor who is now in the Biden administration.

Bonta said his first priority would be implementing a new state law requiring the state’s top law enforcement officer to investigate every fatal police shooting of an unarmed civilian.

"That is so important right now as we have a racial justice reckoning in this nation — how we have a reckoning around how we police in this state and in this nation," Bonta told lawmakers considering his nomination to succeed Xavier Becerra, who resigned to become U.S. Health and Human Services secretary.

"We need to rebuild trust between law enforcement and communities," Bonta added. "Accountability is part of that trust."

Becerra had opposed investigating all slayings by police, saying the attorney general’s office lacked enough staff and money. Becerra took limited roles in investigating some of the state’s most prominent killings by police in recent years.

Bonta, Becerra and Newsom are all Democrats, and Bonta is expected to face easy confirmation Thursday by the Assembly and Senate, both controlled by his own party.

The co-chairmen of the Assembly’s Special Committee on the Office of the Attorney General, also Democrats, subtly questioned Becerra’s policies and performance in a four-page letter they sent to Bonta before Wednesday’s hearing, asking him how he would run the office.

Assemblymen Reggie Jones-Sawyer and Mark Stone asked in their letter if he would commit to making police misconduct files public, and Bonta faced similar questioning by members of the Senate Rules Committee.

Becerra had balked, saying the police files should come from local law enforcement agencies and not his office. But Bonta said he supported the law as a legislator and would comply.

And lawmakers in both chambers pressed Bonta on how he would eliminate a lingering backlog in the state’s unique program that seizes firearms from people who bought them legally but are no longer allowed to own them because of a criminal conviction or mental illness.

"We’ve got some challenges," Bonta said, but "I want to do better."

He said he wants to work with lawmakers to fill vacancies among special agents who enforce the law and upgrade technology that’s "a little clunky" and requires that information be manually entered.

He called rampant gun violence "America’s disease." But he said under questioning by Republican lawmakers that he takes no issue with gun owners’ constitutional rights.

"I believe in commonsense gun safety policies," he said. "My focus is on those who will do harm."

The gun-seizure backlog plagued both Becerra and his predecessor, now U.S. Sen. Kamala Harris. The office itself has long been a stepping-stone to higher office, including for Harris’ predecessor — former Gov. Jerry Brown.

Becerra spent much of his tenure aggressively fighting the Republican Trump administration, but lawmakers said Bonta’s role is likely to change with a largely cooperative relationship with the Democratic Biden administration.