Roofs ripped off homes in Parkwood neighborhood in NE Philly

Shawnette Wilson reports on the damage in Northeast Philadelphia

NORTHEAST PHILADELPHIA - Roofs were everywhere in Northeast Philadelphia except on top of homes, but neighbors say they were happy to have survived the brunt of Isaias.

"Just going through here, it's a war zone right on this street and you can see the path of destruction," said Denise McReynolds. She’s talking about downed trees and pieces of roofs everywhere but on top of houses. Even smashed cars and shattered windshields. One of them belongs to Kristina Kincade’s boyfriend.

"He was at work and I called him and I said I think you might want to come home," Kincade stated.

Kincade says when her boyfriend got there, he found his car wasn’t the only problem.

"There was trash everywhere. I think one of the roofs over there came and landed in our yard. Our AC unit is down. All the electricity is out," she said. The storm lasted about two minutes she added.

"All of a sudden there's flashes of light. I look out the window and I see the tree fall and it's just a burst of air. It was crazy," said Kincade. 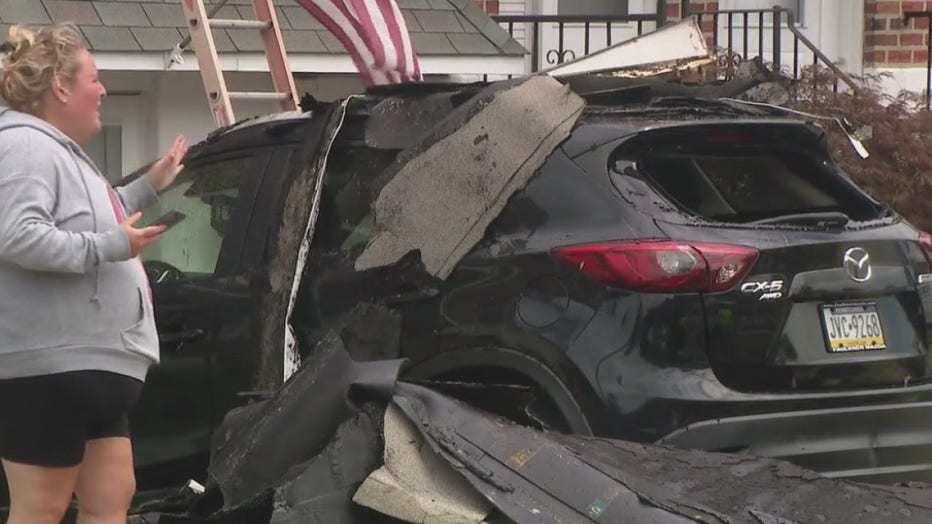 Neighbors all along Medford Road in the Parkwood section of Northeast Philly rushed out at the sight of the sun. The calm after the storm. They cleaned up with the help of contractors. Denise McReynolds recalls the height of the storm.

"All of a sudden I heard a boom at my front window," she said.

McReynolds can see her twin sister's house from her window and rushed over to check out the damage while her sister was at work.

"The top of the trees were sheared off where I know there was a tree and that got broken off and went into her roof," she said.

Emergency crews were also on scene including PECO which Diane McDowell says had to turn off power.

"The tree broke down and it's hitting electrical and that's what we're all worried about," McDowell said.

As bad as it looks, neighbors here are grateful for one thing.

"Stuff can be replaced. Nobody that I know of got hurt," said McDowell.