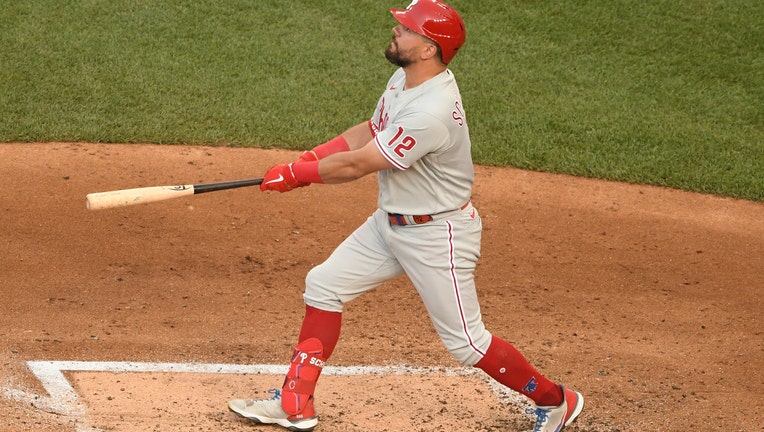 WASHINGTON, DC - JUNE 16: Kyle Schwarber #12 of the Philadelphia Phillies hits a two run home run in the third inning during a baseball game against the Washington Nationals at Nationals Park on June 16, 2022 in Washington, DC. (Photo by Mitchell Lay

PHILADELPHIA - Kyle Schwarber homered twice, Zack Wheeler won his third consecutive start, and the Philadelphia Phillies routed the Washington Nationals 10-1 in the opener of a five-game series on Thursday night.

Philadelphia, which scored seven runs in the third inning, has won 12 of its last 14 and improved to 11-2 under interim manager Rob Thomson.

The last-place Nationals have lost five in a row and eight of their last 10. They have dropped nine in a row to the Phillies dating to last season, their longest skid against their NL East rival since a nine-game slide in 2009.

Wheeler (6-3) allowed one run and four hits in seven innings while striking out three. The right-hander improved to 3-0 with a 1.42 ERA in three starts this month.

The Phillies blew the game open with a two-out rally in the third that started when Washington second baseman César Hernández misplayed Yairo Muñoz’s sharp grounder up the middle. Schwarber then drilled a 1-0 fastball from Patrick Corbin into the center field seats.

Things spiraled from there for Corbin (3-9), who yielded a double and a walk before Nick Castellanos and J.T. Realmuto delivered consecutive RBI singles. Both scored on Didi Gregorius’ double, and Gregorius came around for the inning’s seventh unearned run when first baseman Josh Bell sailed a throw to Corbin on Alec Bohm’s grounder.

Schwarber led off the fourth with a solo shot to right. It was his 17th career multi-homer game and his third in 2022, his first season with Philadelphia.

Bell homered in the fourth for Washington.

Nationals: OF Juan Soto (bruised right knee) returned to the lineup after a two-game absence.

Thursday marked the first meeting of the season between the clubs, but they’ll be familiar foes the rest of the year. Philadelphia will play 19 of its last 99 games against the Nationals, while Washington gets 19 of its final 97 games against the Phillies.

With a doubleheader looming Friday, Washington used utility man Ehire Adrianza to pitch the ninth. He allowed a leadoff walk before retiring the next three hitters, including a strikeout of Bohm. Adrianza is the second position player to pitch for the Nationals; Dee Strange-Gordon worked an inning on April 12.

Former National Bryce Harper was once again booed by the smattering of fans in attendance before each plate appearance, a regular occurrence in Washington since he signed a 13-year, $330 million deal with Philadelphia in 2019. Harper, who played his first seven seasons in Washington and was the 2015 NL MVP as a National, went 1 for 4 with a walk and two runs.

Phillies: LHPs Ranger Suárez (4-4, 4.40 ERA) and Bailey Falter (0-2, 4.20) are set to start in a day-night doubleheader that includes a makeup of a game postponed by the lockout.