A hospital patient in New York City has tested positive for an aggressive variant of the coronavirus.

NEW YORK - A patient in a New York City hospital has tested positive for the South African variant of the coronavirus.

During a news conference Monday, Gov. Andrew Cuomo said the patient is between 50 to 60 years old, is not a New York resident and was transferred to a city hospital from Connecticut for a procedure. The patient has no recent travel history.

Contact tracing is underway, but Cuomo says, there’s no evidence of any spread in New York.

The governor didn't provide details on what hospital the patient was being treated at in the city, the gender or their condition. 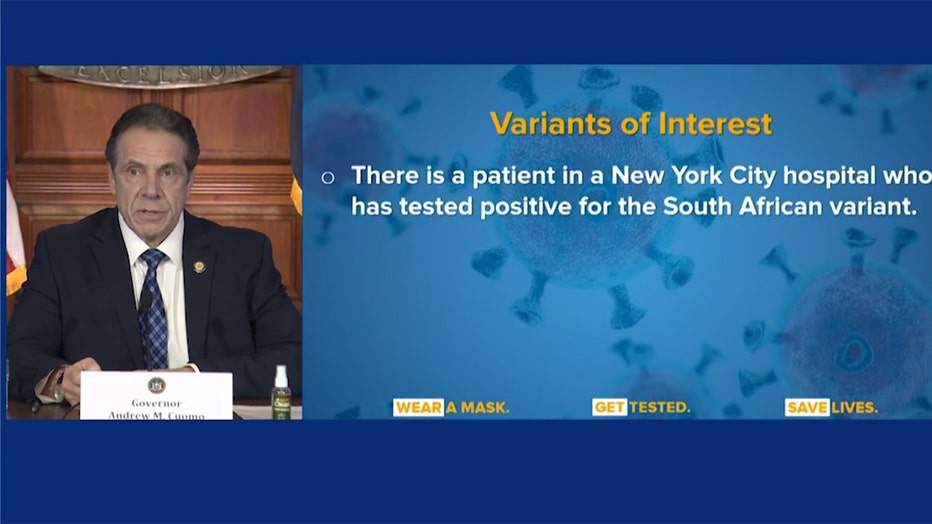 There are concerns about the mutation's effect on coronavirus vaccines and its potential to be more deadly than the original strain.

But there's no evidence, according to Dr. Andrew Pekosz of John Hopkins University, that the South African variant causes a more severe illness.

"Even if they don’t cause more disease, if they cause more cases, you’ll have that trickle-down effect of more hospitalizations and more deaths," said Dr. Pekosz.

More than one million people have received both doses of the vaccine in New York. More than two million others have gotten their first shot. It’s a start, but still far less than the number of New Yorkers eligible. Especially now that the state has increased eligibility to for people with pre-existing health conditions.

Gov. Cuomo claims New York has the ability to be distributing a lot more vaccine, but the supply just isn’t there.