Kelly Rule reports on travelers at Philadelphia International Airport and folks out shopping ahead of the first storm.

SOUTH PHILADELPHIA - The messy weather on one of the busiest travel weekends is a recipe for a perfect storm. Flight delays and cancellations begin to mount around the country.

“We were a little worried,” said Robert Mason, after dropping his son off at Philadelphia International Airport.

Sunday morning’s growing security line at the airport suddenly seemed minor when Mason dropped his son off, knowing the son’s flight would take off on time before Mother Nature took her turn. Things for Mason have not always gone as planned. 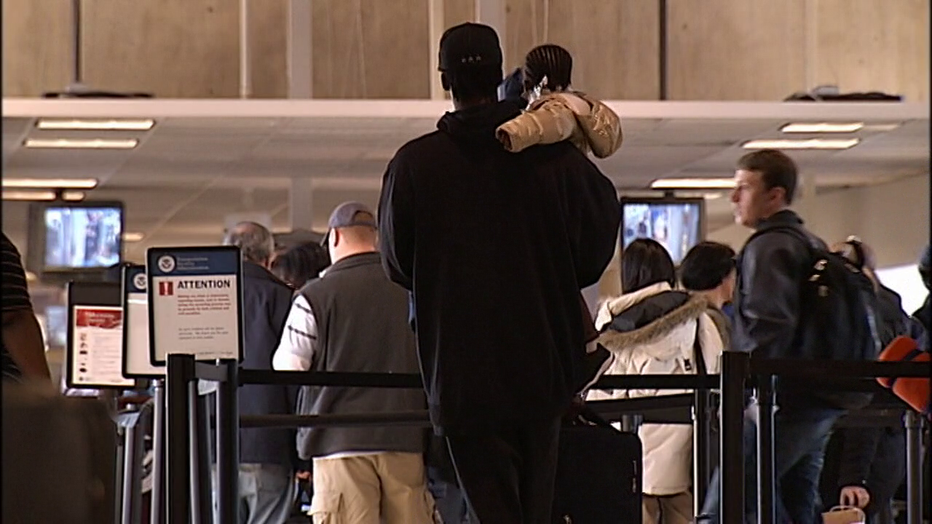 Traveling from Philadelphia International Airport ahead of impending winter storm.

“We’ve been stuck here for a few hours. I think last time was eight hours and the flight was canceled and they had to push it to the next day,” Mason relayed.

Many of the 100,000 passengers expected to pass through the airport on Sunday alone. While most of the Sunday a.m. flights took off as planned, Nancy Andrew’s daughter wasn’t as lucky.

“The flight first was delayed 45 minutes. Then another 15. It’s now delayed about an hour and 20 minutes to Chicago from here,” explained Andrew.

Those spared from having to catch a flight still spent Sunday geared up for what would come.

“Just getting some new tires and stuff to eat, that’s all,” said one gentleman preparing for the impending weather.

“So you have the perfect hat for winter, did you get this for the possible snow tomorrow?” asked FOX 29’s Kelly Rule.

Royal and his family got their shopping done early at Walmart. It’s nothing Philly native Ronald Williams hasn’t seen before.

“Nothing new for me, I’m used to it,” Williams stated.

And, at the Wawa on Aramingo Avenue, lots of drivers filling up before they hit the road, or deal with whatever comes their way before work Monday.

“I don’t have to do much traveling. I’m not far from work, but I like to be prepared. It’s probably going to be a nuisance and better be prepared for a nuisance,” Brian Tush explained.

Snow lovers aside, most can agree with Jack Clarke - hoping this storm doesn’t get too messy.

“This now just kind of like snuck up on us, so I pray to God we have a nice, safe weather that passes right through us and keeps moving,” said Jack Clarke.